I’ve been playing Eve Online on and off since 2006. It’s a very complex game with 500000 active accounts, all playing on the same server. What this means is that it has the most interesting economy of any game out there due to the huge number of interacting players, complex supply and manufacturing chains and a complete lack of market regulation.

This makes it a great sandbox for observing economic behaviours and principles from the real world, manifesting in its virtual economy. Here I’ve picked a few interesting or important things that I’ve come across.

This is probably the most basic and misunderstood concept in Eve, so it’s likely misunderstood in real life as well. The opportunity cost of doing something is the price of not being able to do something else instead. For example, you’ll frequently come across advice in game like “mine your own minerals to increase your profit margin on manufacturing.”

Sounds sensible, but it’s completely wrong. Mining minerals may be a worthwhile thing to do, but it doesn’t increase manufacturing profits. They are two independent activities, and should be treated as such. Profit calculations for manufacturing should use the market value of the input materials, and not how much it personally cost you to acquire them. This is because you could have sold your mining output instead of using it. The opportunity cost using your minerals is that you can’t sell them (although there are other reasons why you might want to produce your own inputs, e.g. avoiding transaction taxes, or saving time selling and transporting, or just for fun).

Here’s a real world example. Suppose you need to clean your house, but you also have the option to work some paid overtime. You may think you can save money by doing the cleaning yourself, but if the overtime pays more than the cost of a cleaner then you’re better off working and paying someone else. The opportunity cost of doing your own cleaning is that you can’t be working at the same time. 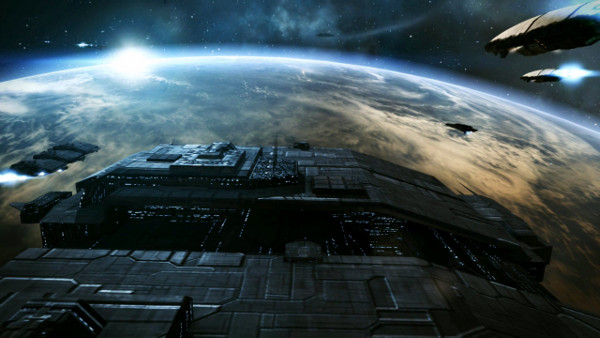 The design of Eve includes no central trade areas. Anyone is free to sell or buy anything anywhere in the galaxy. What is interesting is that a series of market ‘hubs’ have spontaneously emerged, with one main super-hub in the solar system of Jita. Many years ago, when there were less players and no major markets, some systems with slightly better facilities and connections were more densely populated that others. This meant slightly more market activity in those systems which attracted new players looking for markets, which grew the market even more. The result is a positive feedback loop, with the end result being that if you now want to buy or sell something quickly you go to Jita (or one of the smaller ‘regional hubs’ that grew along the same principles, but to a lesser extent).

There are a few downsides of basing your Eve industrial business in or near a popular hub. One is the rental cost of corporation offices (required for efficiently managing your industrial activities), which are much higher in popular systems. Another is availability of factories – these are limited and you can wait many days for a slot around trade hubs.

There are analogous factors at work in the real world, affecting where people and businesses base themselves. There are bigger markets and trade opportunities for London-based companies, but the rents are huge. Smaller cities have reduced costs at the expense of available markets and potential workforce. Different companies weigh up these factors and choose an appropriate location.

I found some statistics about the populations of the most popular systems in Eve, so I thought I’d compare it to the sizes of the largest UK cities. The results are quite striking: 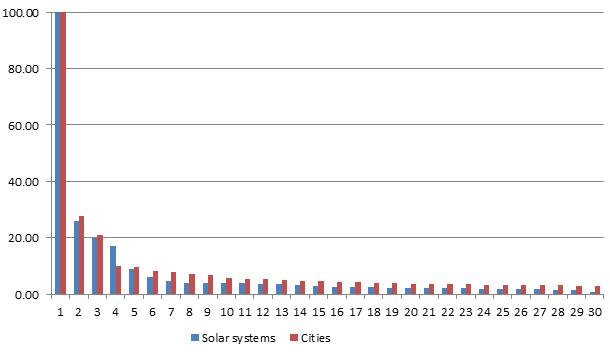 Comparing the normalised populations of the top 30 systems and UK cities, you can see a large degree of similarity in the distribution. There is one super-system/city (Jita/London), followed by a few large ones (Amarr/Birmingham, Rens/Manchester, Dodixie/Liverpool), followed by lots of much smaller ones.

The relative proportions are very similar. This suggests that similar price/opportunity trade-offs may be being made in Eve as in the real world, leading to a similar distribution. Eve populations seems to favour the larger hubs while the UK population is spread slightly more evenly, which could be explained by there being stronger non-economic reasons for living in a certain place in the real world than in Eve.

Here’s a more technical version of the above graph – log of population against log of rank. You can see they both follow a power law (very high R² value means the linear trend line is a good fit), even though the absolute population numbers in solar systems are very small so are prone to noise (or large passing fleets). The drop off in population is indeed faster in Eve as I mentioned above. Further analysis is left as an exercise to the reader 🙂 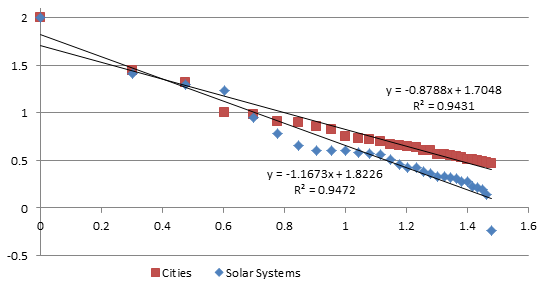 Price vs Convenience, and Time Is Money

There are many ways of making money in Eve, and the one thing they have in common is that they take time. Time is the limiting resource of both Eve players and real-world workers. Travel in Eve is also slow, and flying around for fifteen minutes to save a few ISK (the in-game currency) is inefficient, as you’re paying the opportunity cost of not doing something more profitable.

Similarly, coffee shops in busy station charge a huge markup compared to a café you could find ten minutes walk away. It’s inefficient to use your time to save a pound if it takes a sizeable chunk out of your working day.

This inefficiency creates market opportunities. Ammo and other consumables are generally priced much higher outside of trade hubs, leading to higher profits, in the same way as station coffee shops. (Well, actually it’s the people renting the space to the coffee shop that make the profit, but as there is no shop rent in Eve the producer can keep it.) 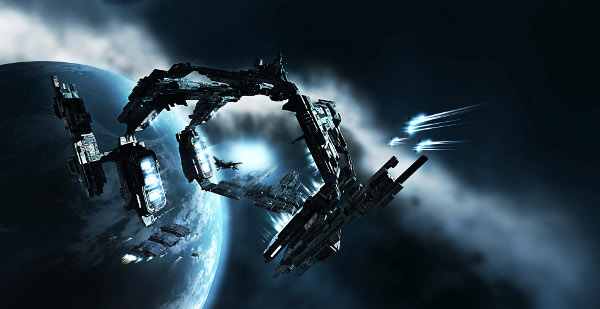 In an efficient free market it’s possible to either make a large profit per item sold, or to move large volumes of items, but not both. Where large volumes are shifted (trade hubs, busy shopping streets) you will find other businesses in competition and high prices will be undercut. In the ‘convenience’ market described above (backwater systems, small village shops) less people can be bothered to fight for the meagre sales so there is less competition and prices can be higher.

One example is manufacturers who sell their own goods. It is worth putting a few items on sale at the place of production, at inflated prices, to pick up passing trade, but manufacturing ability far outstrips these sales volumes. The bulk of the items will need to be sold at trade hubs where turnover can be huge – a smaller markup per item but higher overall profits.

You can see this with farmers markets and farm shops. Volume is small, but profits per item are much higher. The excess has to be sold to bulk buyers (e.g. supermarkets), but the additional profits from direct sales provide a nice additional income.

In the real world, if you want to buy or sell shares or a commodity then it is nearly always possible to conduct the trade immediately. It doesn’t require waiting for another person who wants to buy exactly the same amount of shares that you’re selling. This is good because it enables more trades to take place quicker, which means more benefits to those trading. The market is said to be fluid.

Fluid markets are enabled by professional traders – if you go to a foreign exchange they will buy currency at slightly below the average price, and sell it at slightly above. Therefore there is always a reasonably priced seller or buyer for your currency. The same principle applies to shares, commodities and other goods. The higher the potential profit (total traded volume multiplied by markup) the more competition will be attracted, and the buy and sell prices will converge.

Professional trading can be seen in action at trade hubs on almost all of the 6000-odd different items available in Eve. You will see buy and sell orders for huge volumes of items that could never be for personal use. High value items like ships attract a lot of competition and will have margins of 5-10% between the highest buy order and the lowest sell order. This means that whenever you want to buy or sell a ship, you can do so immediately with very little financial loss – you’re effectively paying the traders for convenience.

A weakness in the market can be seen by looking at some of the less popular items, where you’ll see 100% or more markup between the buy and sell prices. The volumes just aren’t there to support more competition – bringing the buy and sell prices closer together would mean it’s not worth the bother of trading, given that there are plenty of other things to do in game. 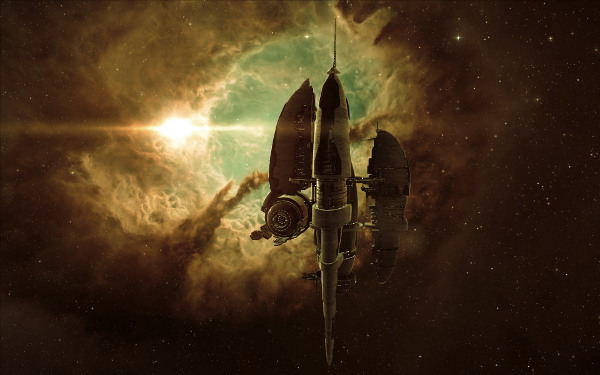 Barrier to entry, monopolies and cartels

An important principle in economics is the barrier to entry to a market. There are two reasons why the profit margin on an item may be high, but only one means you’re being ripped off:

To tell if you’re being taken advantage of, look at how hard it is to set up a competing business. If it’s easy then you’re probably not being ripped off and it’s just hard to make a profit. There are lots of examples of barriers to entry, from government restrictions (e.g. pre-privatisation utilities), to long professional training requirements (lawyers, doctors), to prohibitive startup costs (building a supermarket).

You can see these in operation in Eve. One interesting development was the creation of OTEC – the Organisation of Technetium Exporting Corporations – founded on the same principles as the more familiar OPEC. Technetium is a vital component in the manufacturing chain of many items in Eve, and is only found in one area the galaxy under the control of a small number of corporations. The barrier to entry here is nearly absolute – getting into the market would require overwhelming military force and months of warfare. Hence it was practical to set up a price fixing cartel and reap the resulting massive profits.

Another historical example was the breaking of the monopoly on Tech2 goods (these are better ships and weapons than the standard ones). Originally, the ability to manufacture these goods was distributed via lottery to a few lucky individuals. The one I’m most familiar with is the Damage Control II component, where I made most of my ISK.

With no competition, the first of these things were selling at 200+ million ISK each.  After a couple of years a game mechanic called Invention was introduced which allowed anyone to make them,  but less efficiently and with a significant up-front investment required for tools, skills and materials (in the order of 500 million ISK, and several weeks of in game training time). When I jumped in, prices had dropped to around 2 million ISK/unit, with about 60% of that as profit.

Over the next few months the initial investment price dropped and now it’s possible to enter the market with a few tens of millions. Profits are right down to something like 300,000 ISK/unit, and it’s approaching the “worth it” line where I need to decide whether it’s worth carrying on production.

Thus enabling competition has successfully brought the cost of a good right down to theoretical minimum of the cost of production plus the minimum profit required to make people bother. Economics in action!