Lately I’ve mainly been playing a couple of shooters at different ends of the same evolutionary path.  They are Planetside 2 and Wolfenstein: Enemy Territory (henceforth called ET).

I’ll start with ET, as it’s pretty old now and you might not have come across it.  It’s a free game that started out as an expansion to Return to Castle Wolfenstein, but was never finished and simply given away as a standalone game.  Amazingly I’ve been playing this on and off with my gaming group for eight or nine years now, and it still gets an enthusiastic response. 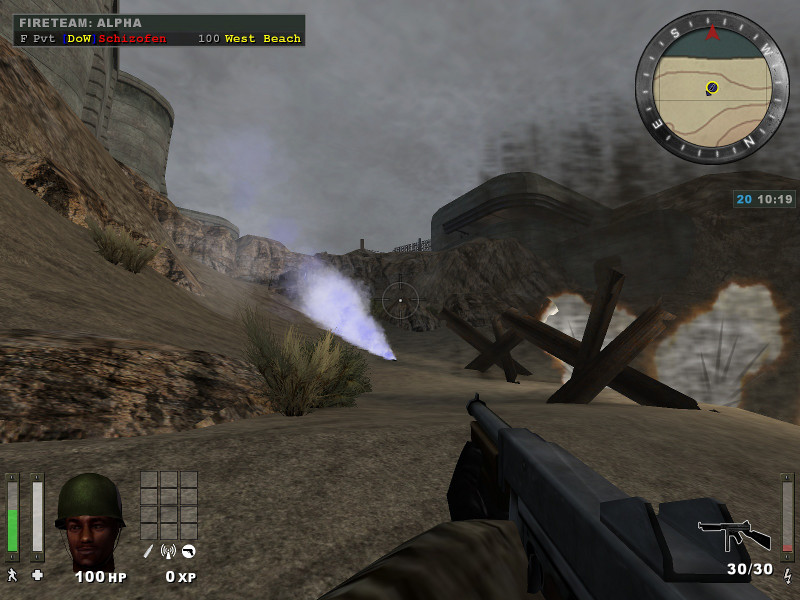 This is purely a multiplayer game and was an early example of lots of the things you see in modern shooters. It has asymmetrical gameplay, with an attacking and defending team. It’s purely objective based, with a string of objectives for the attacker to accomplish within a time limit.  It’s class based, with five distinct classes. And it has an XP and levelling system.

Our favourite map is Fuel Dump.  The Allies are attacking and first must escort a tank across a bridge, with their engineers keeping it repaired while the Axis team rain down air strikes and sniper shots. Oh, and the bridge requires building before the tank can cross, and every time it’s built the Axis team seem to blow it up again.  Then the tank is driven through a tunnel system before finally blowing a hole in the fuel dump wall.  Finally the Allies have to get into the base, destroy the gates with explosives and plant the dynamite.

The longer maps can be a bit of a gruelling slog, repeatedly running out into the defenders’ guns as you inch closer to achieving the objective, but when you finally get that dynamite to blow seconds before the 30 minute timer runs down, it’s really rewarding. The classes are varied – the engineer is the most generally useful as most objectives require building stuff or blowing stuff up, but you’ll likely die a lot. Soldiers have heavy weapons (switch to the Panzerfaust if you’re getting frustrated at not getting any kills…). Covert Ops can steal uniforms and snipe. Medics pick everyone up again when they go down. Finally, Field Ops get love and hate in equal measure as a well timed airstrike takes out three enemies in one go, or you wipe your entire team with a misplaced flare canister throw. 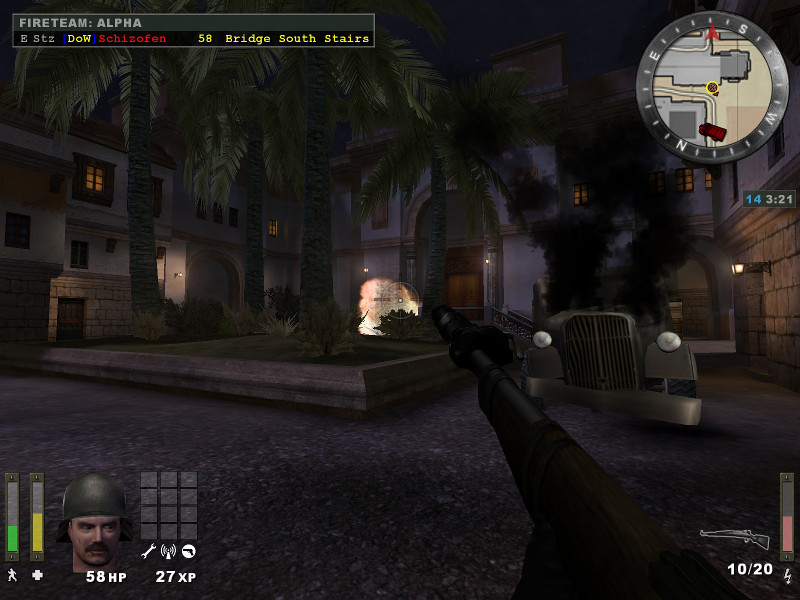 It’s not the most accessible game ever, likely because it wasn’t ‘finished’. There are very few hints as to what you’re supposed to be doing as a new player and the maps can be a bit confusing, but after a game or two on each with someone showing you the ropes you’ll know exactly what’s going on. Also you need a decent sized group of players to make it work – three per side is the absolute minimum in my opinion, but you’ll have a great game with five or more per team.

I’m not exactly sure why we’re all still playing it years later (and in preference to many more recent games, including the disappointing sequal, ET: Quake Wars). At a guess, I’d say that it’s because it’s free (everyone has a copy), it runs fine on literally any machine, there are no server and connection issues (we have our own private server), and we’re all ‘bought in’ so there’s no learning period any more.  Oh, and it’s just a damned good game.

At the other end of the spectrum is Planetside 2, which I’ve played a fair bit in the last few weeks. Planetside 2 is an MMOFPS, with each server seeing hundreds of players across three teams, all fighting over the same objectives at once on a massive map. 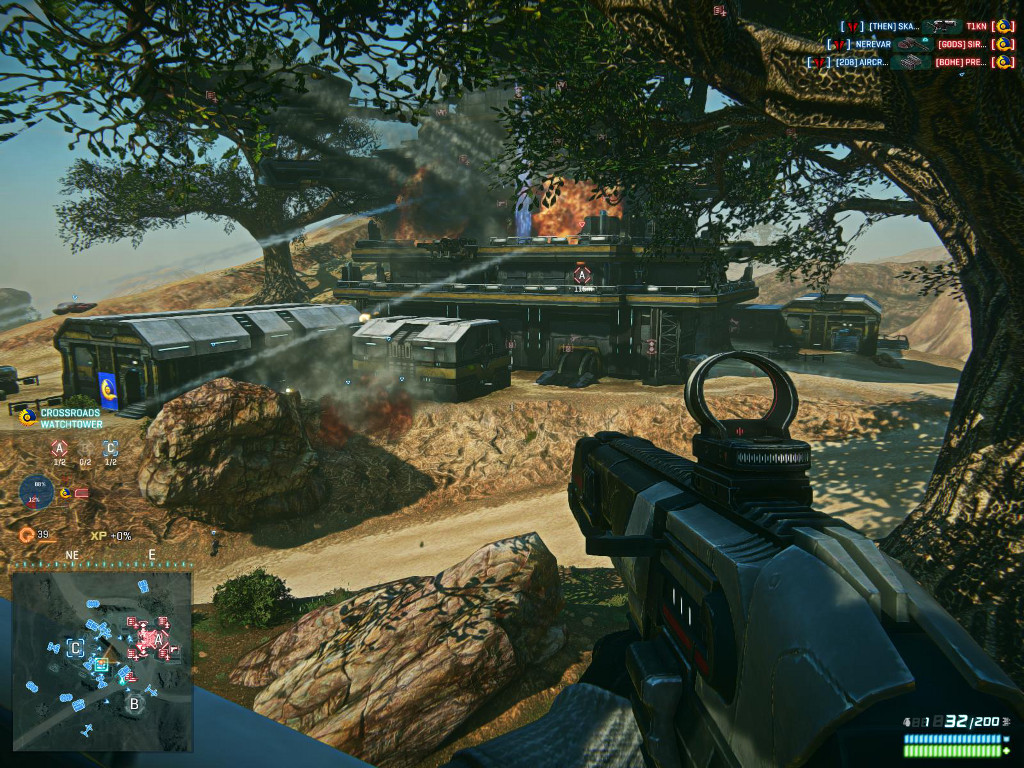 PS2 also isn’t a particularly newbie-friendly game. The UI is confusing, and the mechanics of capturing objectives isn’t obvious. Identifying friend from foe is tricky, the constant explosions and gunfire is disorientating, and standing still in the open will get a sniper’s bullet in your head.  And it’s the closest a game has made to feel to taking part in a real war.

Or at least, one of those fictional wars where random people are pulled off the streets, given a gun and thrown into a combat zone with no training.

Nowhere is this more apparent than with the aircraft. My favourite activity in Planetside is flying the fighter jets. Very rarely do I get shot down. This isn’t because I’m some kind of flying ace, but because most flights end up with me crashing into mountains, buildings, trees, or the ground. Occasionally I crash into enemy aircraft, but that’s good because they tend to blow up and I get XP. Sometimes I manage to shoot at ground targets, although I imagine the conversation in the last transport I attacked would have gone something like this:

“Hey, there’s a plane firing rockets at us!”

“Really? But we’ve taken no damage.”

“Yeah, I’m using ‘at’ in the vaguest sense.  Oh, he’s coming in closer… er… looks like he’s trying to park upside down…” 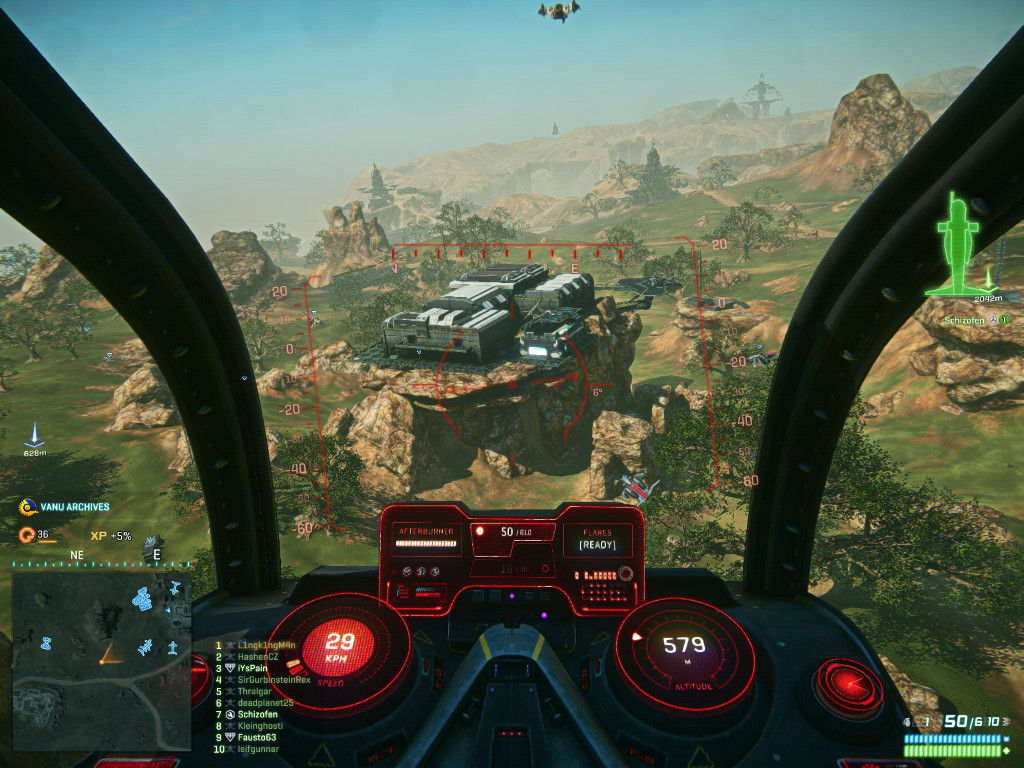 Planetside 2, not crashed this plane yet

This is a free to play, micro-transaction supported game. This instantly sets off alarm bells among gamers about pay-to-win, but I’m impressed with how much this isn’t the case. All you can buy with real money is additional weapons and cosmetic player customisations. The basic free weapons are all good, and the paid for ones are just different rather than better.  All of the other unlocks and upgrades are bought with XP earned in game, so it’s perfectly viable to play on a level playing field without spending any money.

When this game is good, it’s really good. Your enjoyment is quite dependent on getting into a good squad (or bringing your own group of friends).  If you’re lucky you’ll end up in a well organised team, with a leader with voice comms who knows what they’re doing and sets appropriate objectives.  When that happens it’s as good an MMO experience as I’ve ever had (well, outside of a successful Eve Online fleet battle, but I don’t have time for those any more).

If you’re on Woodman server and come across a TR player called Schizofen, go easy on him…