I’ve got a reasonably well painted Warhammer 40K Chaos Marine army, so I thought I’d show off a few pictures (click through for larger images). I’ve not really found the time to do any painting for over a year now (too much blogging, programming, gaming etc) but some of the new Chaos Marine miniatures look really nice so I like to thing I’ll get round to painting some eventually.

Starting off with my first HQ unit, an old Daemon Prince with wings. The skin was the first larger painted area that I managed to get a fairly smooth finish on. 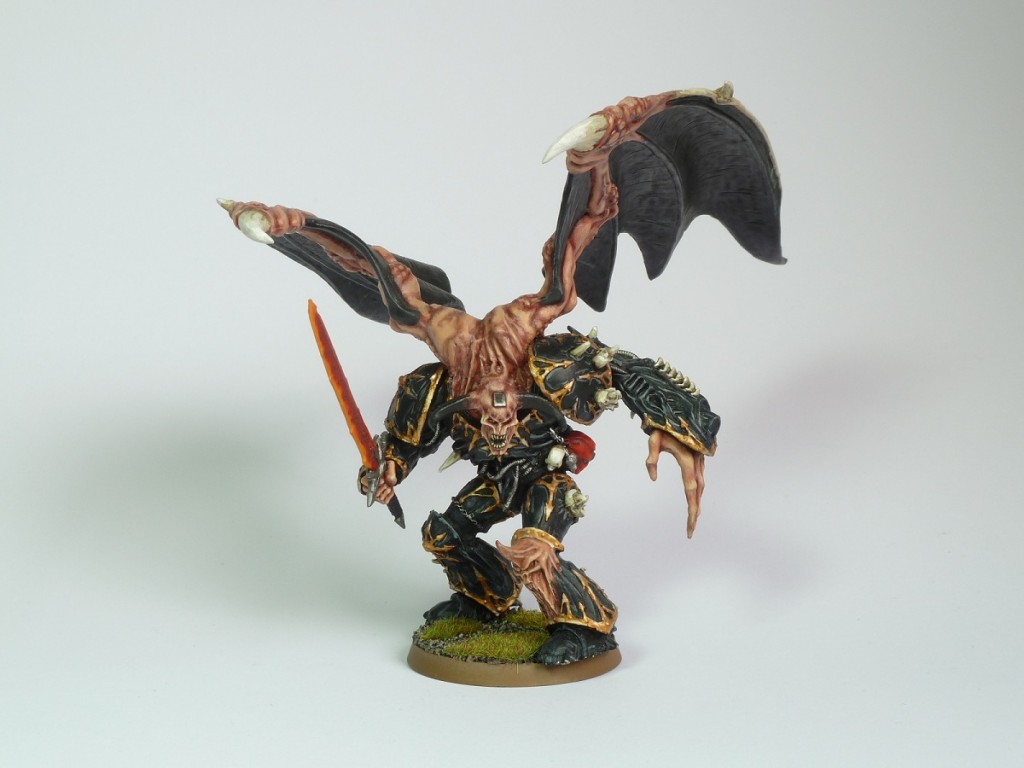 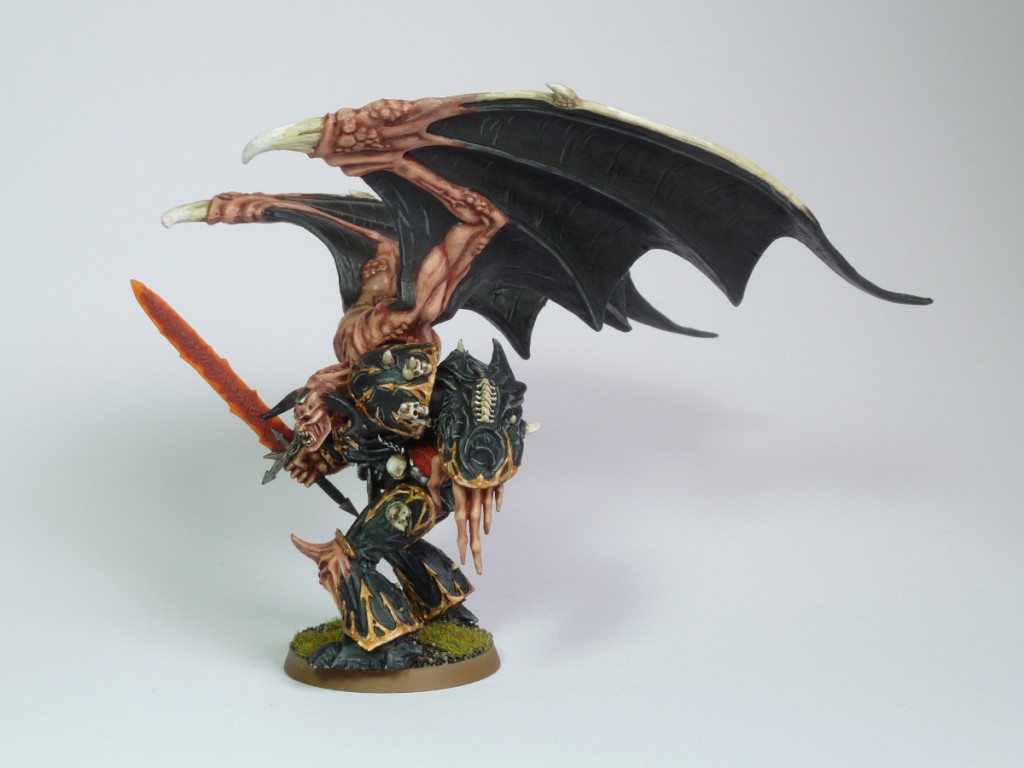 This is my other large HQ unit, a Chaos Lord on a Manticore (which I ran as a counts-as Daemon Prince because it didn’t feel right to have two Princes in the same army). It’s definitely my favourite and best painted model. I don’t really like the pose of the original model with both arms lunging forwards, but rotating the right arm down gave it a really dynamic feel of pushing its way through the ruins. Trim the rocks off the back foot to leave it free standing, swap out the Lord’s arms for 40k arms and job done.

The skin of the Manticore turned out really well, and it’s the first (and possibly only) time that I managed to get some really smooth layered blending working. I’d like to work on my smooth layering more in the future (although I suspect this is just a function of time spent – I remember it taking a whole afternoon to just do the skin). 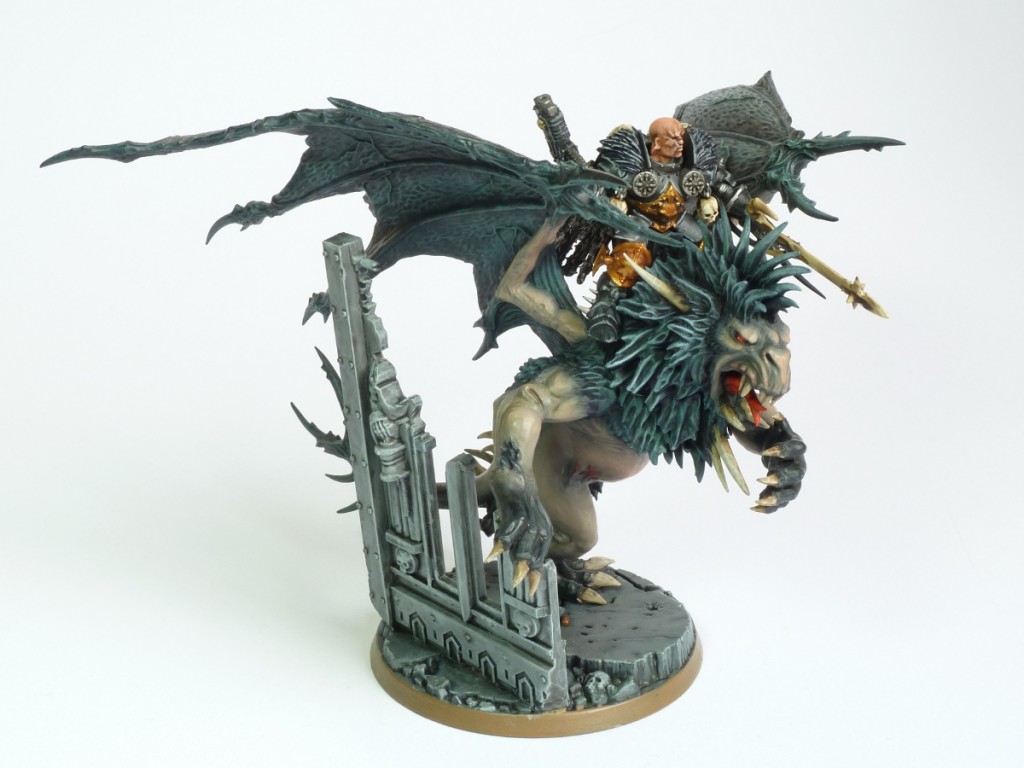 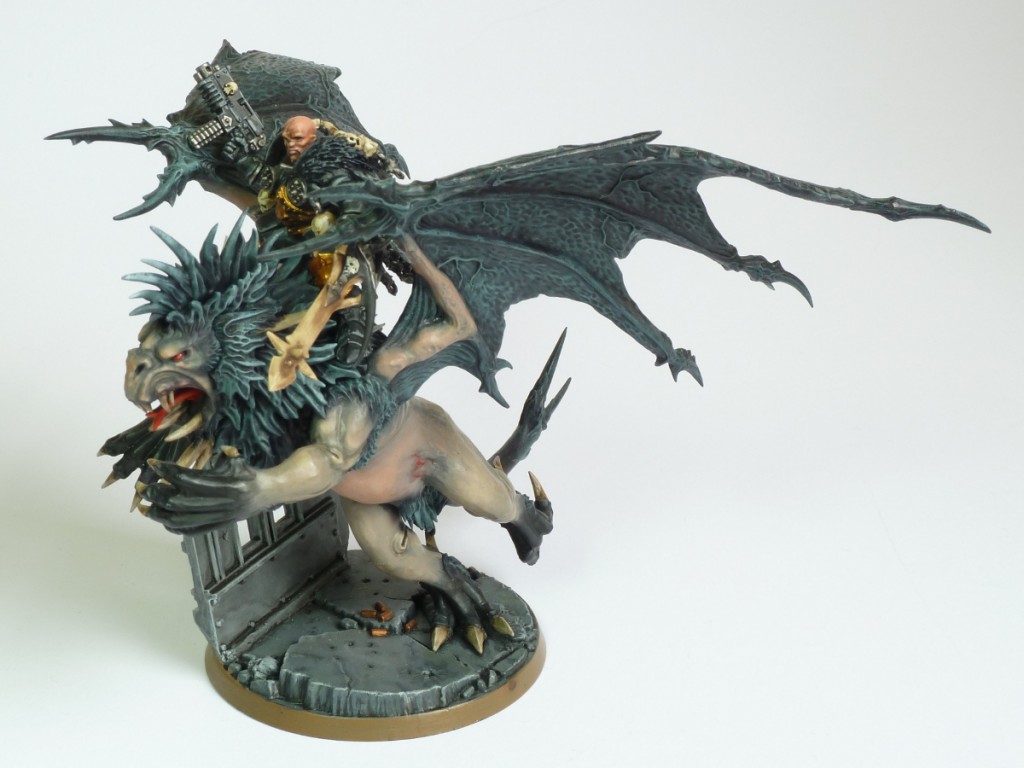 I’d wanted a set of Lightning Claw Terminators since about 1995, and these guys all look suitably menacing. 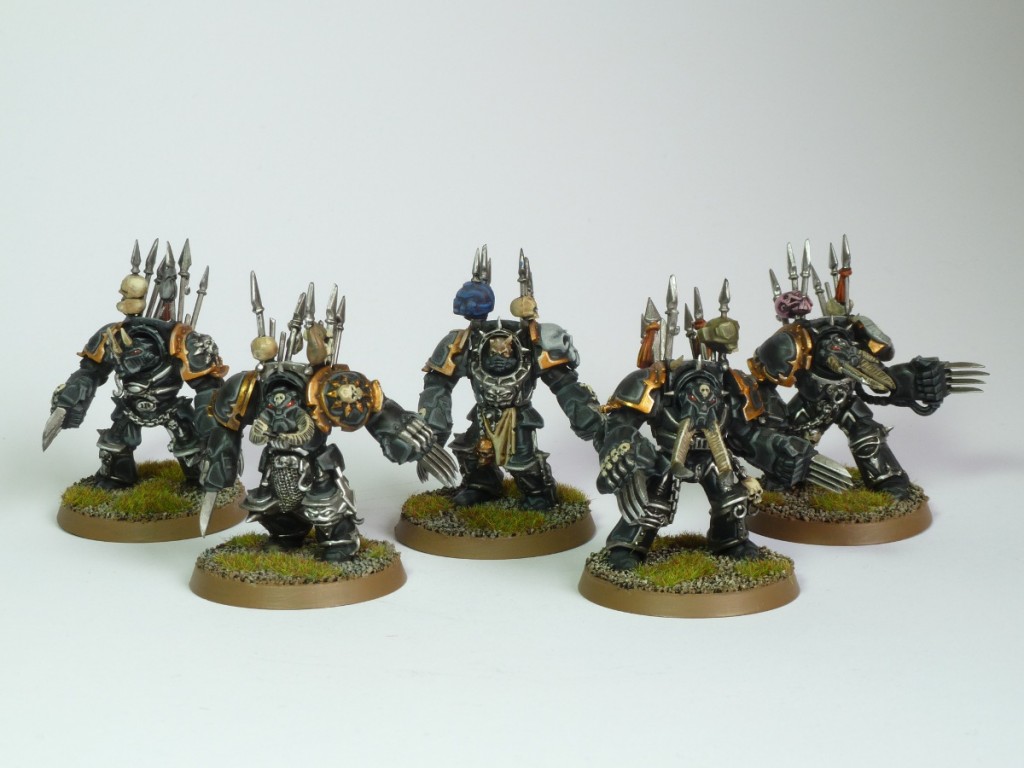 And they need a Land Raider to ride around in. It’s amazing how much difference a bit of paint chipping makes to the apparent realism of the model. I think the mud effect works well – that just involves getting some really watered down brown paint and sploshing it all over the bottom section with a big brush, not technical at all (and it’s slightly worrying when you do it, potentially ruining your careful painting underneath…). 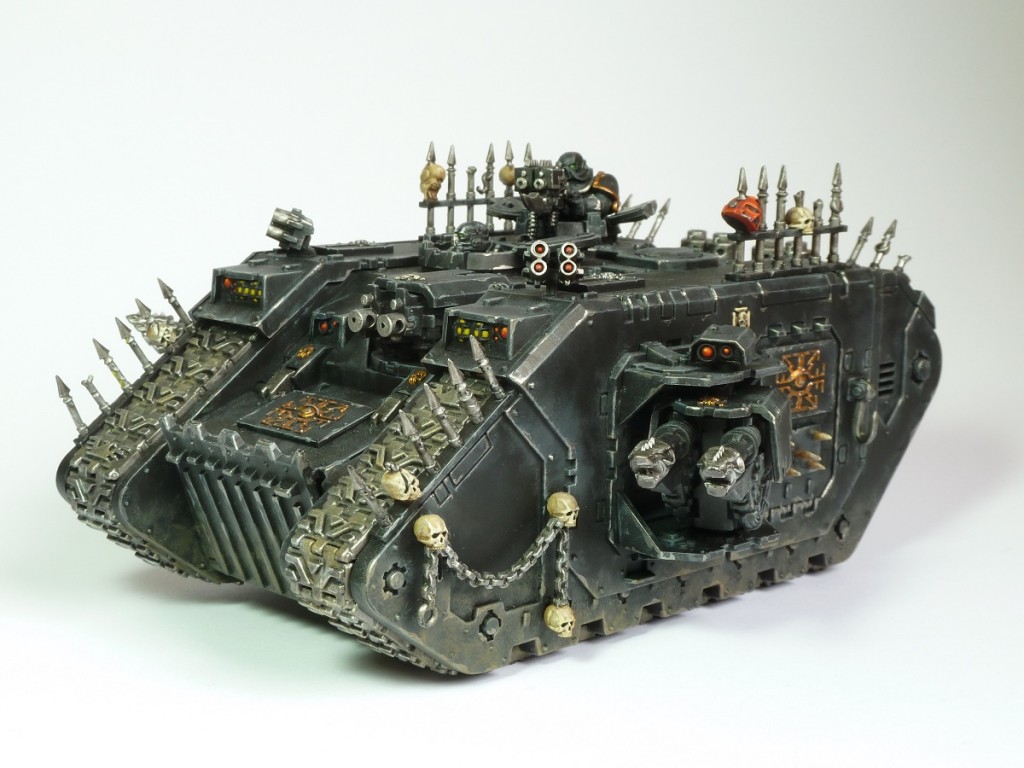 The Thousand Sons give some opportunity to get a bit of colour into the army. Blue seems to be a really forgiving colour for blending and highlighting, I don’t know why. I try to theme all of my Rhinos so you know what squad they’re carrying, so I added some warp-flame and lanterns (some spare Fantasy bits I had lying around). 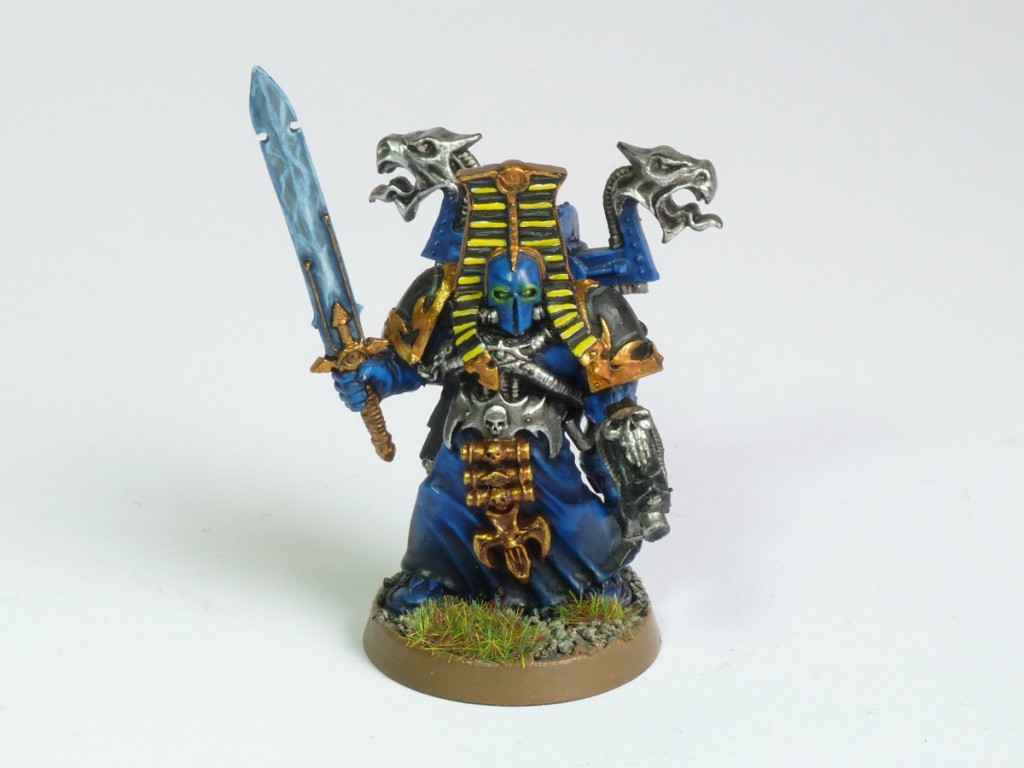 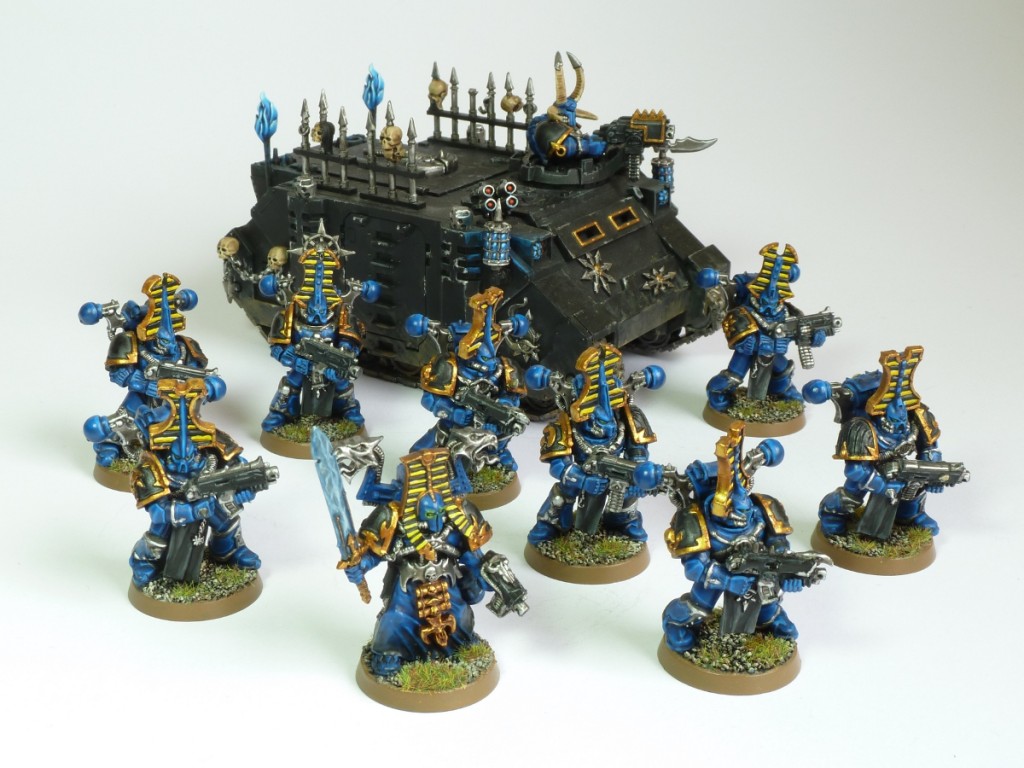 The Berserkers were some of the first models I assembled and painted since coming back to the hobby as an adult, so some of the poses are a bit weird. Never underestimate the value of good posing – more important than the paint job for getting good looking models. 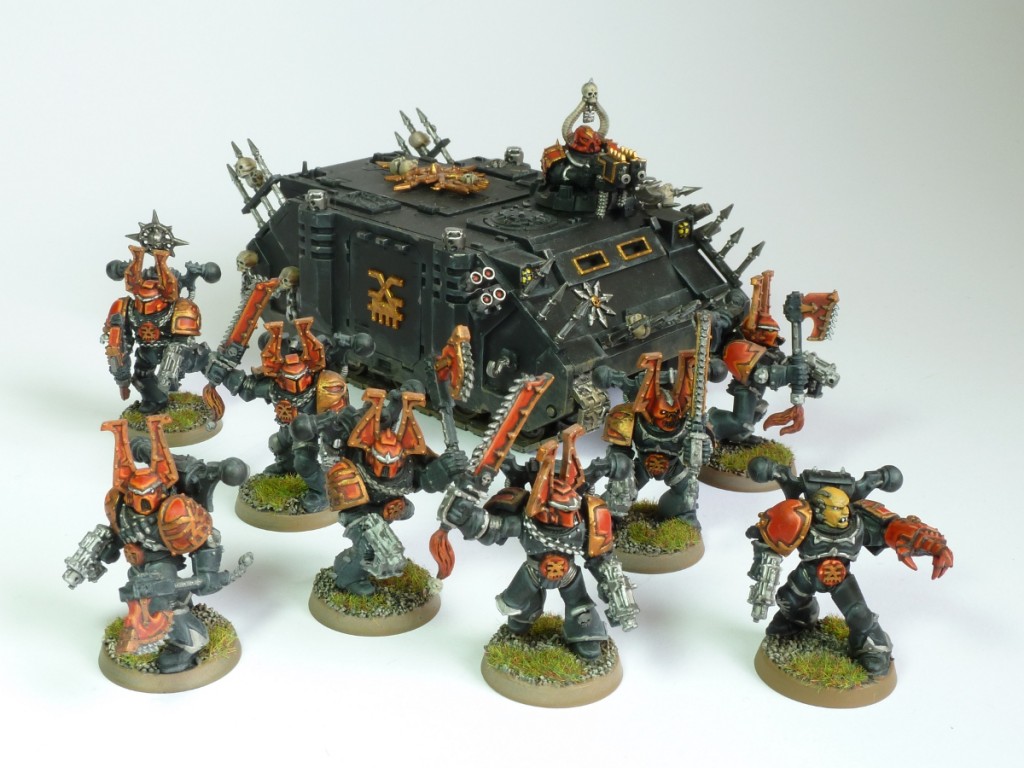 Some normal marines. The Black Legion colour scheme is fairly quick to paint – the most time consuming bit is all the silver and gold edging (straight on top of a black spray undercoat). 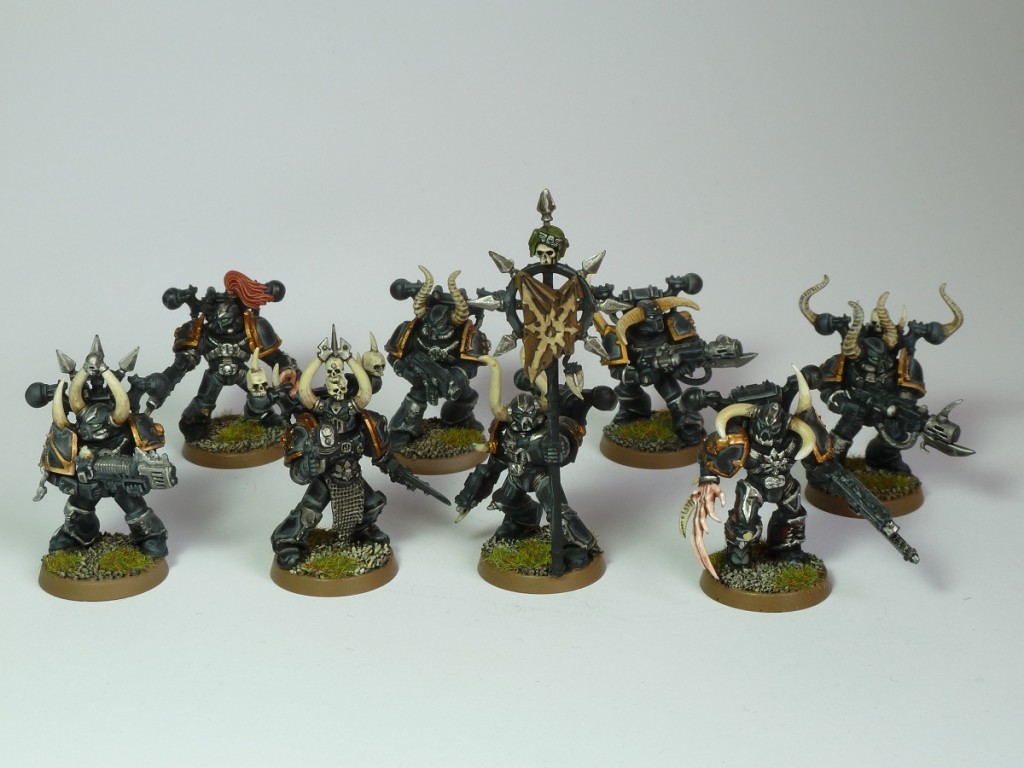 I ‘borrowed’ this idea for the Vindicator from one I saw online a long time ago – the body pile from the Corpse Cart kit fits almost perfectly on the dozer blade, and then pack all the holes with rubble and sand. 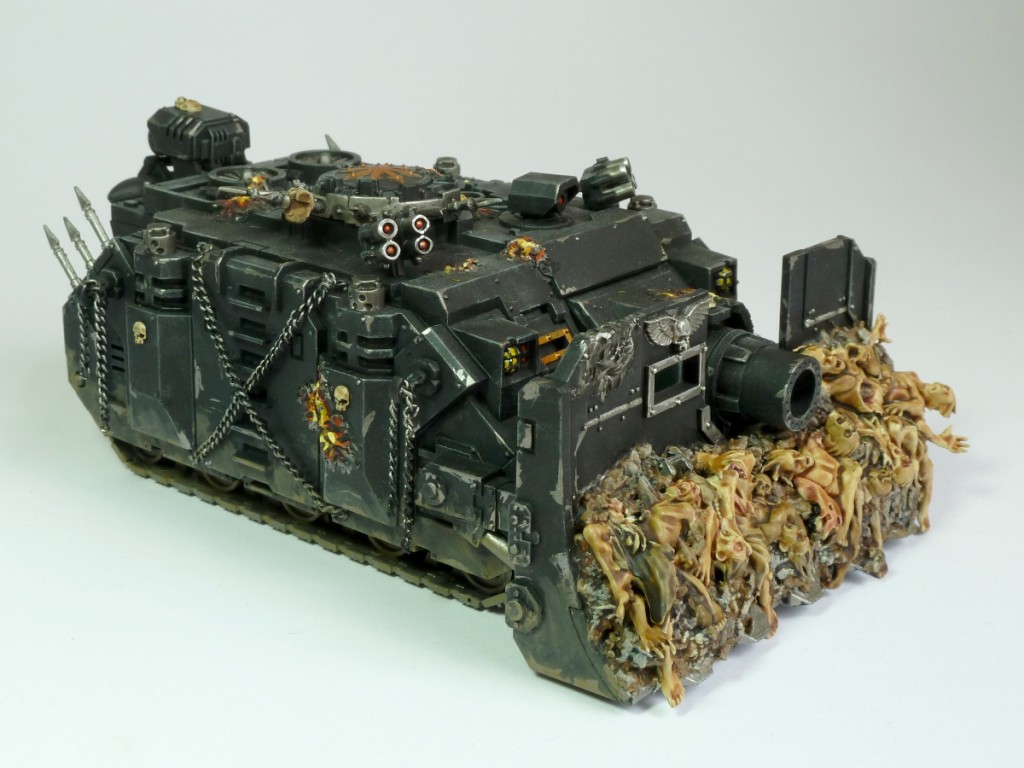 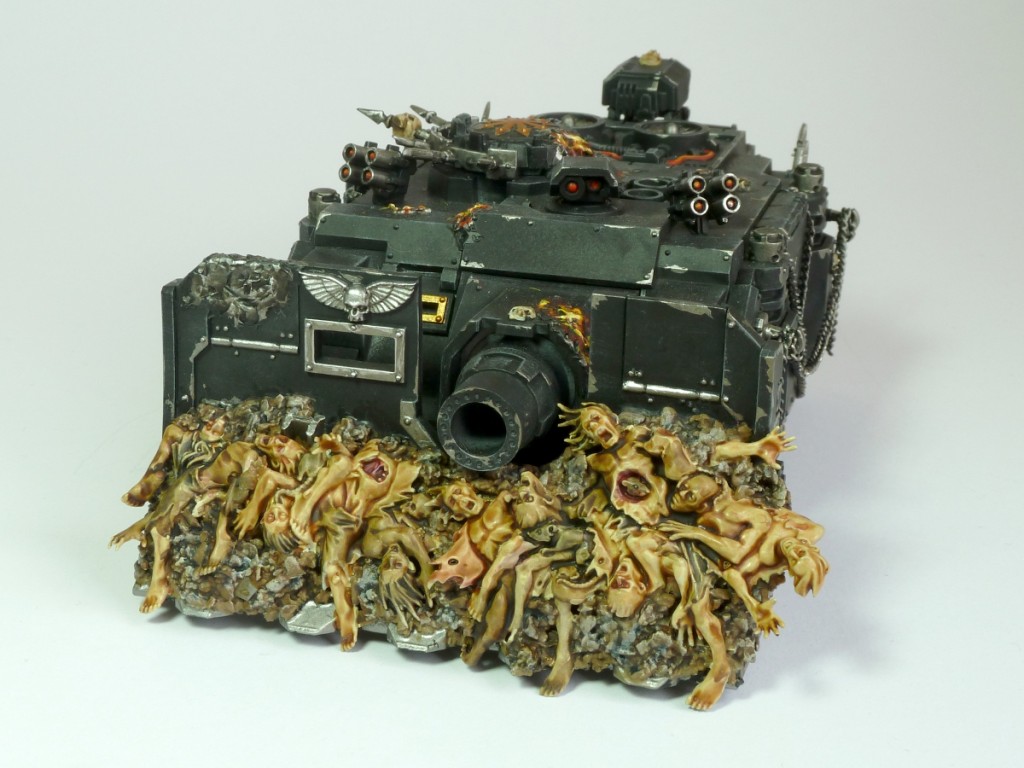 The Daemonettes were a vaguely successful attempt at painting skin and brighter colours, but they look fairly messy close up (I’d like to try another batch one day). The purple claws came out really well, which I think was mainly just through drybrushing. 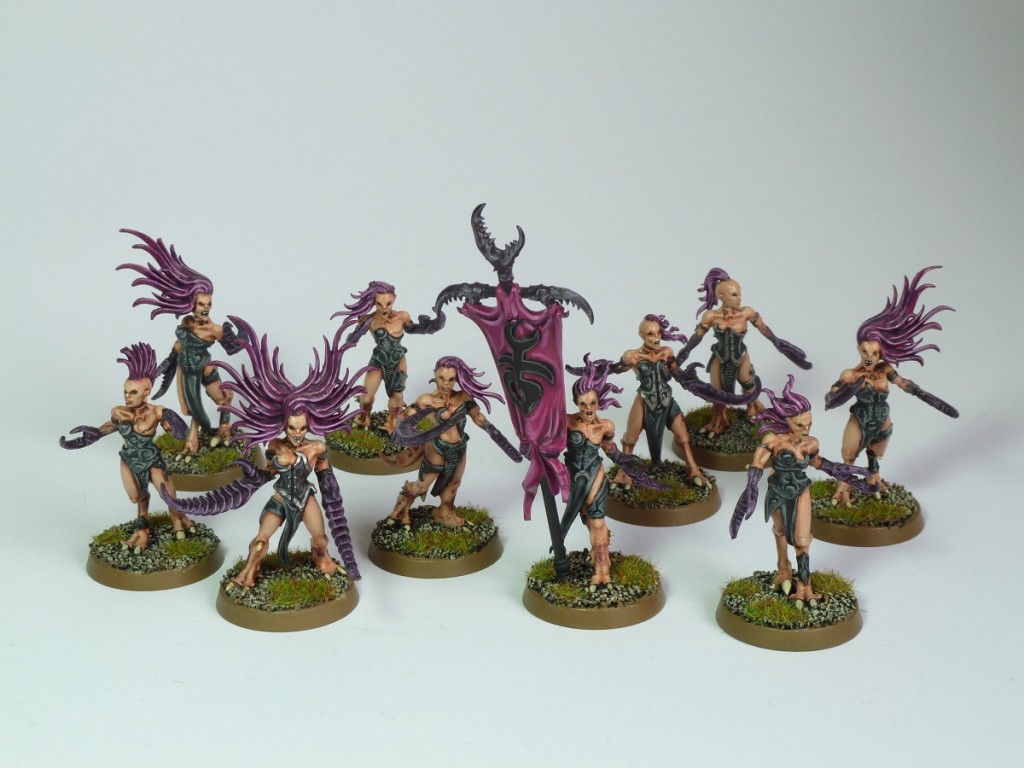 A couple of Obliterators. It was all the rage to have loads of these guys but the metal models are such a pain to stick together than I couldn’t face doing any more after the first two (plus they’re really expensive). 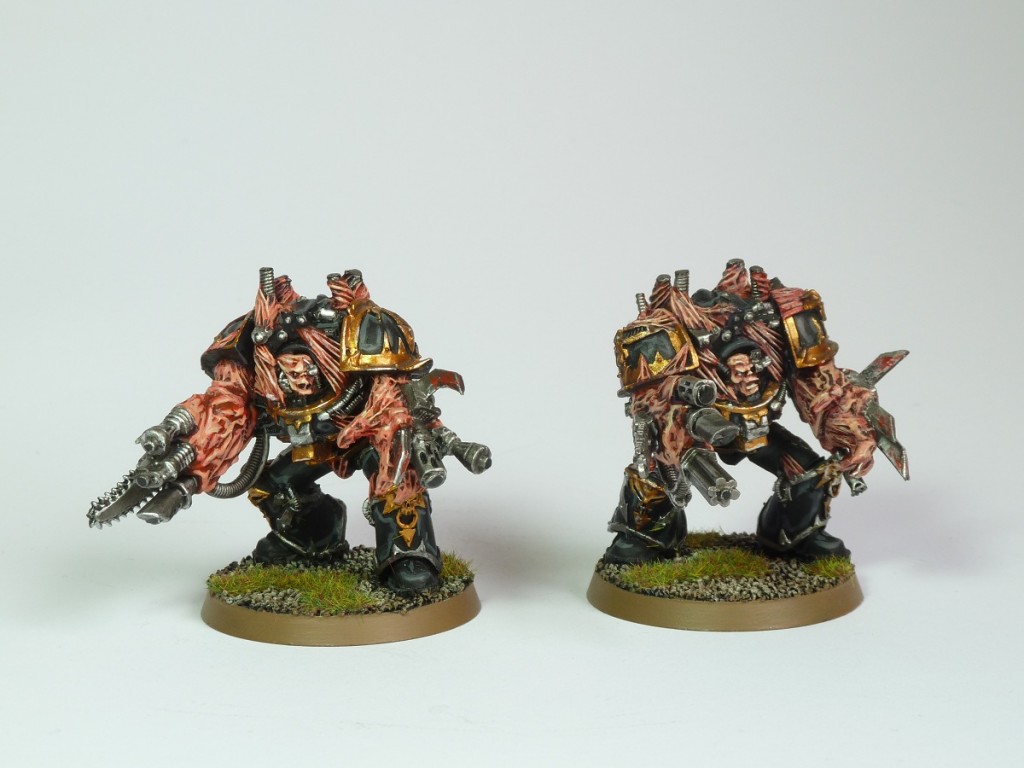 I accidently ended up with a few too many Dreadnoughts (currently up to six I believe) so I thought I’d better paint one. Nothing special but it looks fine on the table. 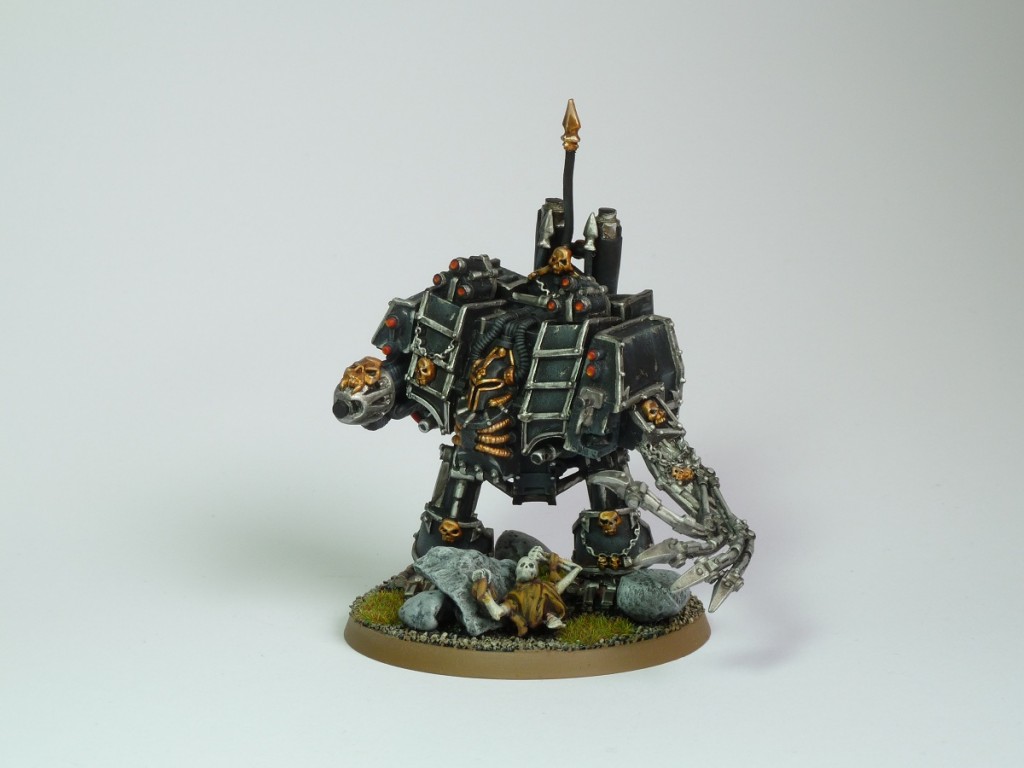 I did a few Orks early on to make a change from painting black. I like to keep them nice and (overly) bright – I’ve seen darker green Orks on the tabletop and they become quite hard to distinguish any details. 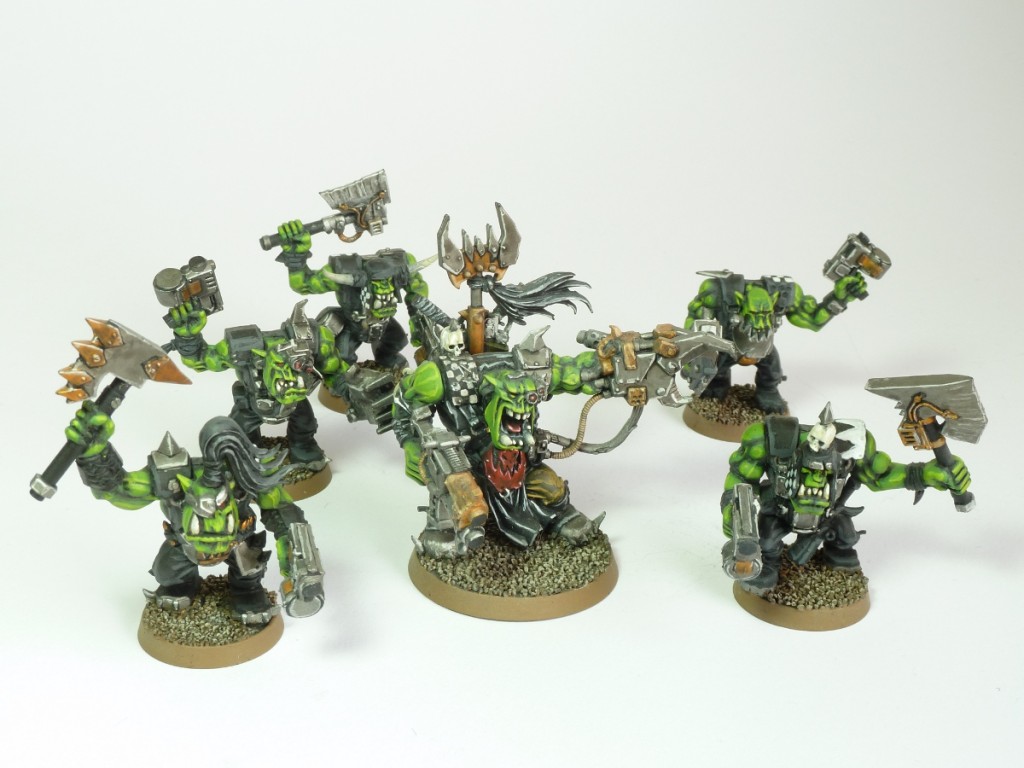 More recently I felt like trying something a bit different, so I tried one of the old Inquisitor models (which are twice the size of the normal miniatures). I’m quite pleased by how it turned out, apart from the green on the back of the cloak which isn’t as smooth as I was intending (hence no pictures of the back!). 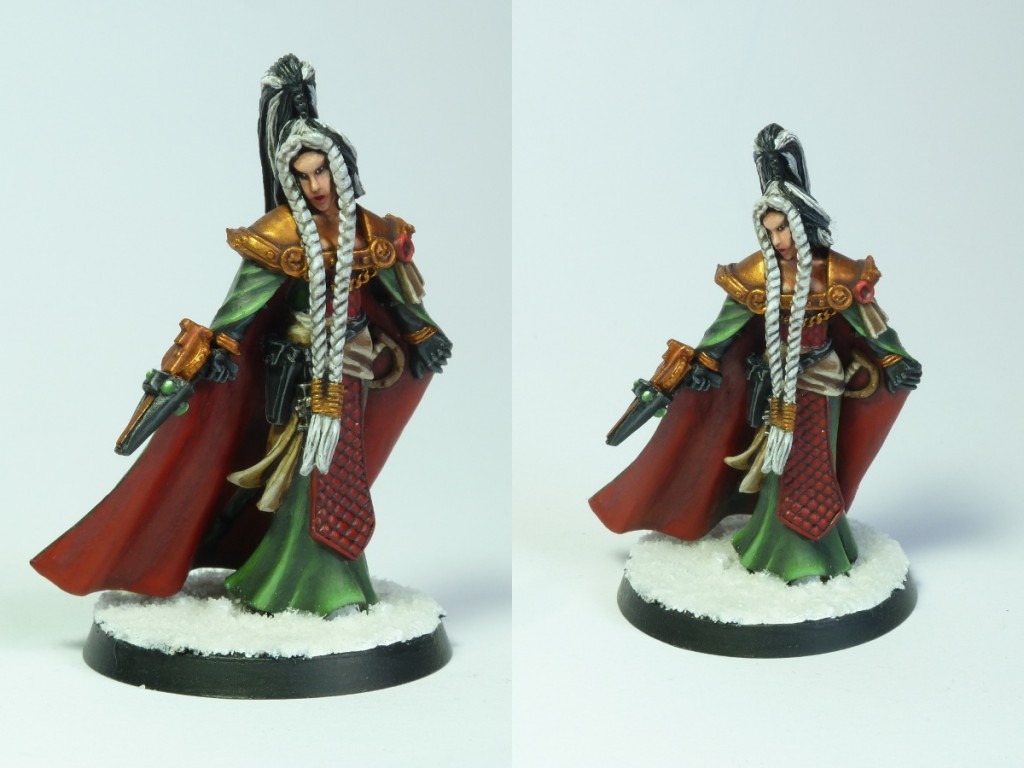