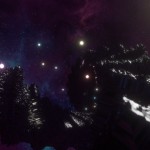 Here’s a quick video of something I’ve been working on recently: This is just an experiment in coming up with a more interesting ray-marched scene to test out graphics techniques. It may be developed into a proper demo at some point, but that probably requires more artistic input than I’m able to give, so we’ll […]

Last time I talked about basic ambient and diffuse lighting.  This is good for perfectly matt surfaces, but every real surface has some degree of specularity, which is when light is reflected off a surface to give a shiny appearance.  You may not think of most objects as having a shiny surface, but it’s a […] 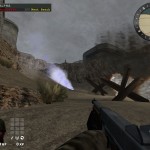 A while back I had a quick search for soft shadowing techniques for ray-marching rendering, but somehow I didn’t manage to find anything very useful.  So I just had a play around and came up with something.  Here’s the video from last time again: Then I did another search and found almost exactly the same technique described here […] 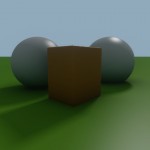 In my last post I mentioned that even the simplest scene can look photo-realistic if lit well, before going on to talk about really simple lighting methods that really don’t.  Obviously you have to start with the basics, but I was playing around with the code to see what could be done and I got […] 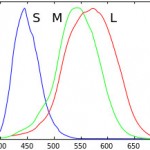 Lighting is what makes a 3D scene look real.  You used to hear talk of the number of polyons or the resolution of the textures in a game, but these days GPUs are powerful enough that we’re rarely limited by these things in any meaningful sense.  The focus now is on the lighting.  The most detailed 3D model […] 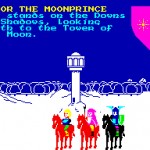 I recently found out that the awesome Spectrum game The Lords Of Midnight had been updated for iOS, so I promptly coughed up the £2.99 asking price and downloaded it. I remember playing the original on my Spectrum when I was probably nine or ten years old.  I paid zero attention to the actual quest, […]

We saw in part 3 how to move the camera around a wireframe world.  Now it’s time to move onto proper solid 3D rendering.  For this we need to introduce a few new concepts: basic shading, vertex attributes, textures and the depth buffer. Solid rendering Moving from wireframe to solid rendering can be as simple as filling in […]

I’ve been playing a couple of space games lately, which is good because I like space games. FTL You’ve probably heard of FTL, if you’ve not already played it.  It’s a small game from a two-man team, and was funded by a successful Kickstarter campaign.  The game is basically about flying your ship through randomly generated sectors of space, […] 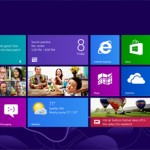 There have been a lot of game developers coming out recently to complain about Windows 8, most notably Gabe Newell.  In the comments sections of news stories you get a lot of people dismissing their concerns and accusing them of overreacting.  I believe that some of these are justified so I’m going to explain why, […] 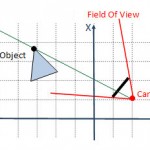 [Warning: this is a slightly more technical article containing talk of matrices, transforms and spaces.  If it doesn’t make sense just carry on to the next article, you don’t need to understand the details!] We saw in the previous article how to draw a point in 3D when the camera is at the origin and looking […] 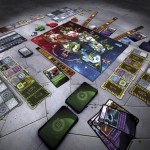 The usual image of board games is of a sedentary pursuit, with players taking their time to decide their next move or roll some dice.  These games can be incredibly tactical and intense, but one thing that’s usually not associated with board games is adrenaline. I’ve played two great games recently that are completely different from […]

These days I’m mainly working with tablet devices including the various flavours of iPad.  A year ago there was just the iPad 1 and the iPad 2, but now the 3 and 4 also exist, as well as the mini.  Here is a summary: iPad 1 – Very limited performance and memory.  The GPU appears […]

When we want to draw something in 3D on a screen, what we’re really doing is trying to draw a flat picture of it as it would look on a film, or projected onto the retina in your eye.  So we have an “eye” position, which is the point from which the scene is viewed, […] 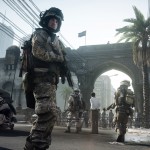 Or more precisely – “Anatomy of a modern realtime photorealistic 3D DX11 renderer, in layman’s terms”. Modern 3D graphics and rendering techniques tend to be viewed as really complicated, specialist and difficult by those not involved in it.  There is an aura of “magic” around how computers can produce the images shown on the screen, and practically zero understanding […]