I’ve been playing a couple of space games lately, which is good because I like space games.

You’ve probably heard of FTL, if you’ve not already played it.  It’s a small game from a two-man team, and was funded by a successful Kickstarter campaign.  The game is basically about flying your ship through randomly generated sectors of space, facing random enemies and encounters and picking up random loot.  What makes it great compared to some of the overblown epics you might have played is that you have one life, there is only one autosave and a whole playthrough only takes an hour or two.

I’m not going to describe the game in detail because that’s been done to death elsewhere.  What’s interesting is that it plays very much like a board game.  Pick a location to move to, draw an event card, pick an action and roll a dice to see what the outcome is.  The combat is realtime and has enough nuances to make it interesting (especially when it comes to the harder enemies and the final boss), but you could definitely see something like this working as a solo tabletop game. 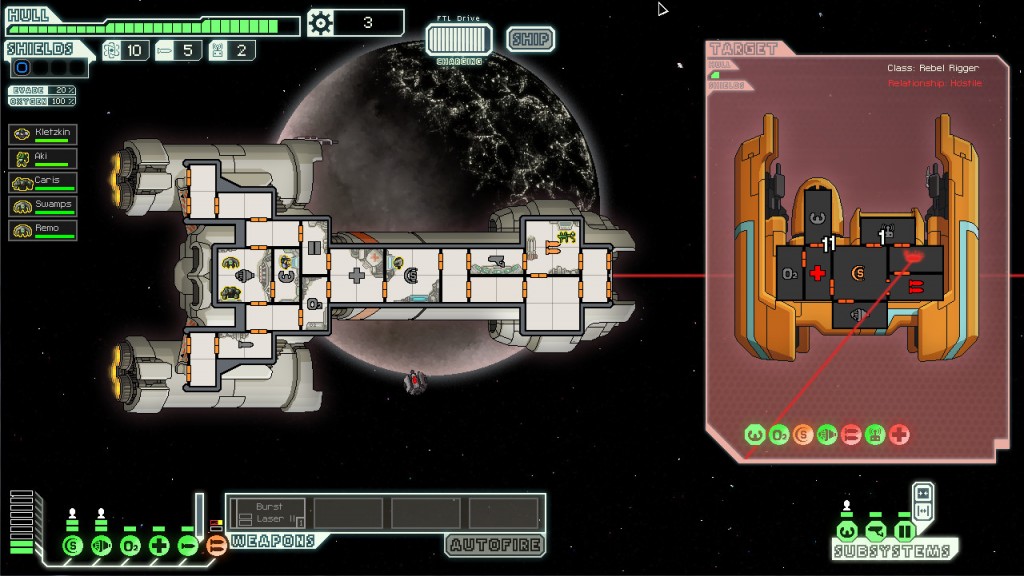 The problem I tend to have with random single player games is I don’t like losing by pure luck.  This is a problem I often find with computer adaptations of games like Catan and Carcasonne, where there is some element of skill but a lot comes down to pure luck of the draw.  When playing against real people this isn’t a problem because, I think, there is still a winner in the room.  But when losing to a computer there is no winner, only a loser, and nobody likes to be a loser…

Having said that, I don’t have that problem in FTL.  Games don’t come a lot more random that FTL, but if you’re getting unfairly screwed you find generally find out in the first few minutes of the game so you can just restart.  Another reason is that you shouldn’t really expect to win.  The game is hard, really hard (and that’s just on the easy setting).  If you just go in with a goal of unlocking a new ship, getting one of the achievements or playing with a different play style (e.g. focus on boarding actions, drones, ion cannons etc) then dying isn’t really a failure, it’s the expected outcome.  I think I’ve just been spoilt for too long with spoon-fed “experience” games, but FTL is a perfect antidote.

So I very much recommend you take a punt if you’ve not played it.  It usually seems to be up for sale for under a fiver, so for that you really can’t go wrong.

I picked up Endless Space in the Steam sale and I’ve been playing around with it a bit.  My first comment is this – it is most definitely not wife-friendly.  The most common question in the house recently has been “What are you playing, that boring game again?”

It is not a boring game (well, if you’re into this kind of thing).  True, there will be a lot of staring at spreadsheets and production queues, but it induces in me exactly the same “one more turn” compulsion that keeps me up late into the night as the various Civilization games over the years.  There is good reason for that – it is basically just Civ In Space.

Instead of cities you have planetary systems, instead of city buildings you have system improvements.  The resources types are exactly the same: food to increase system population, production in each system to build improvements and units, “dust” (gold) to rush constructions, science generated by each system, strategic and luxury resources to unlock new constructions and keep your population happy.  It’ll all seem very familiar.  But that’s not necessarily a bad thing, and it’s all really slickly presented with a nice intuitive interface.

Combat is rather abstract.  Each fight is played out at three range bands – long where missiles dominate, medium where lasers work best, and close which favours projectile weapons.  Your only control is picking an “order” card for each phase, using a board/card game concept again.  Some are offensive, some defensive, and each card cancels out a different class of card.  So if you expect the opponent to play a defensive card in a phase you can for example use the “Sabotage” order which will cancel it out.  It’s a bit random and takes some getting used to but it adds some more interactivity over Civ’s battle system. 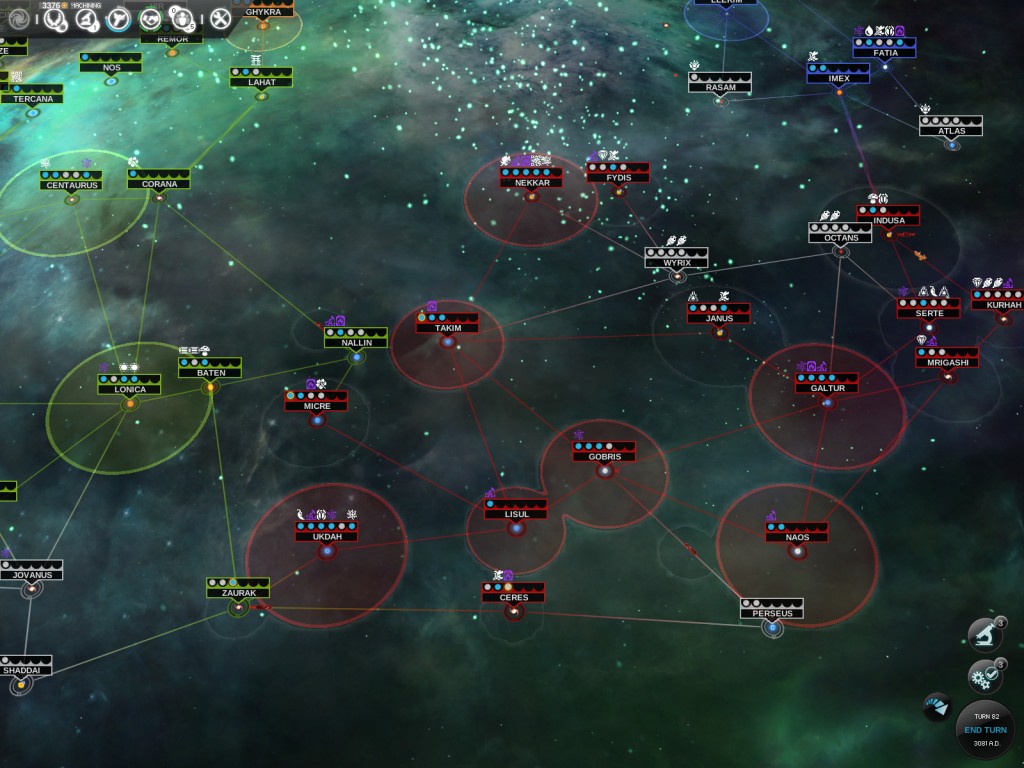 My main problem with the game, and it’s exactly the same problem as Civ has, is that it all gets a bit bogged down about half way through.  When you’ve got 20+ systems to manage, with half a dozen finishing constructions each turn, it takes an age to micromanage what they should all be doing next.  Turns start taking 5-10 minutes each and the game can start to drag a bit.

The tech tree is also huge, and you’ll need a couple of games under your belt to become familiar with all the upgrades.  A couple of times I’ve come across some amazing technology (e.g. the planetary exploitation upgrades) that would have provided some massive boost to my empire if only I’d noticed it 20 turns earlier.

Overall though, it’s a decent game.  If you like Civ games you’ll love it.  If you don’t then you probably won’t.