I hadn’t been to Cheltenham Science Festival before so last Friday I popped down for the day. I went to half a dozen presentations so here’s a summary of the interesting bits.

This was a talk by David Willetts, the Minister for Universities and Science, giving us reasons to be optimistic about the future of technologies, science and industry in the UK. Despite what the doom-mongers claim there are still loads of things that we’re good at in the country, and he talked about eight key areas where we shine:

Overall I was impressed by the Minister. I didn’t have any of the usual sense of frustration or brain-dissolving that I usually get when listening to politicians speaking, and despite not having a science background himself, he seems very able and keen to listen and learn. While it seems obvious to everyone in the field that many wide areas of science should get a lot more funding, I think that the focus on and support of key areas is probably a good compromise between results and political will. In particular, the derogatory remarks he kept making towards the Daily Mail and their ilk regarding their scare stories and general stupidity (my words but the general gist) reassured me that he has his head screwed on and that science in this country isn’t doomed yet. 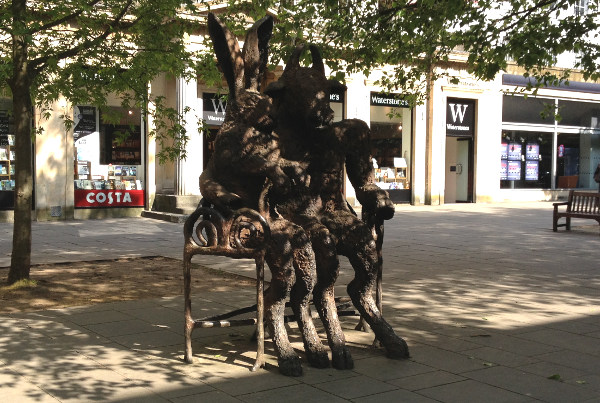 A hare and a minotaur (I have no idea why)

Is The Age Of Silicon Over?

Next up was a talk on new materials, with three guys talking primarily about gallium nitride, graphene and metamaterials and photonics, respectively.

Gallium nitride is a material with a wealth of possible applications. One common use at the moment is in LED lighting, where it is combined with indium to creates high brightness LEDs, and the wavelength of light (therefore the colour) can be controlled by the amount of indium used. Unfortunately, these GaN LEDs can only currently be fabricated on sapphire and are therefore very expensive to produce (hence LED bulbs costing £15 a pop). They are very efficient though, and have the potential to save 50% of the energy used in lighting, which makes up around 20% of the total UK energy use. New manufacturing techniques using silicon substrates instead of sapphire are being developed, and this should lead to a large reduction in cost and a much wider update of LED lighting.

Another really interesting use is that by combining it with aluminium instead of indium, you can produce LEDs that emit in the deep ultraviolet part of the spectrum. This type of light is fatal to life on earth, and the idea is that deep-UV lamps could be placed inside water pipes in developing countries where waterborne diseases are commonplace, killing all the microbes in the water at the point where it enters the home. A similar potential use is in air-con units to kill the recirculating bacteria.

A final use is that GaN is 40% more energy efficient that silicon when used for computing, thus leading to even more energy savings (another potential 5% off national consumption).

Graphene was in the news a few years back when Kostya Novoselov and Andre Geim at the University of Manchester won the Nobel prize for its discovery. Since then it’s all gone a bit quiet in the mainstream press but this ‘miracle material’ will likely still cause a revolution in many areas.

It is 100 times stronger than steel, harder than diamond, very conductive, 98% optically transparent and impermeable. The possible uses talked about were in flexible electronics (e.g. bendable screens), wearable computing and supercapacitors, where the tiny thickness enables huge surface areas to be contained in a small space. Another use is in very accurate sensors, but I didn’t really understand the specifics (seems to be to do with the change in Hall voltage when a single sheet of graphene comes into contact with even single atoms of the thing being measured).

Photonics is to do with processing and manipulating light. I have to admit I didn’t really take in anything that this guy was saying, save that optical computers are still a long way off and we’ll have to stick to electronic computers for the time being. 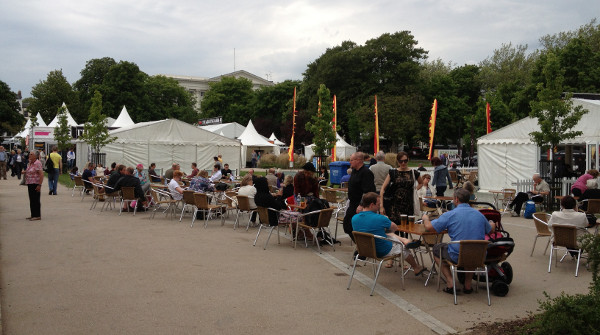 With a title like this I couldn’t not attend, even though I didn’t really know what to expect. Executive summary: this is a very new field looking at quantum mechanical effects on and used by biological systems. And nobody is really sure how important it is.

The general principle is that classical physics works when you have loads of atoms or molecules, because all the quantum variations cancel out. However, down at the level of DNA and some cell biology you’re dealing with individual molecules, and therefore you may have to take quantum effects into consideration.

The problem with quantum biology is that to get observable quantum effects, you need coherence. For example, the double-slit experiment gives an interference pattern, showing photons behaving as waves, only when the you use a coherent light source such as a laser. In the warm and wet world of biology, being able to maintain coherence for long is challenging.

There are currently three main candidates for quantum effects – photosynthesis, sense of smell and magnetic sensing in birds. The most well-developed theory is with photosynthesis where it’s hypothesised that the electron transfer is made more efficient by quantum tunnelling – the tunnelling destinations are defined by the peaks in the interference pattern of a coherent source, similar to in the double-slit experiment.

There were some thoughts about consciousness being a result of quantum effects – the opinion being no, as thought is far too slow and the brain is too big and complex (all other observed quantum effects are between one or two molecules only).

One of the presenters, Paul Davies, finished up were some of his more ‘wacky’ (in his own words) theories. Did quantum mechanics facilitate life to begin with? Quantum superposition can enable rapid exploration of a vast number of arrangements of matter, and if a self-replicating state is in some way selected for, this could vastly reduce the search space. There is more about this in chapter one of his book.

These two talks weren’t presenting anything new, but were entertaining and fast-paced introductions to particle physics and the Standard Model, and the concepts of energy respectively. The Particle Physics talk went through 100 years of scientific progress, from the initial discovery of the atom to the Higgs boson, and our understanding of what all matter is composed of. The Energy presentation started with all the different forms energy can come in (kinetic, potential, sound, chemical etc) and how most of these are different forms of the same thing, before bringing in Einstein and the energy of empty space, and finishing with some brief words on the Casimir effect, negative energy and wormholes.

These were good fun but I think next time I’ll benefit more by heading to talks on subjects that I’m less familiar with, as they usually seem to pitched at a scientifically-literate but definitely non-expert audience.

I found the Portal facility

This session was well worthwhile. Famelab is an international competition to find the next generation of young science communicators. Contestants have three minutes to do a talk on an interesting scientific topic, but in as entertaining and engaging way as possible. All of the presentations were really good, and the winner was Fergus McAuliffe from Ireland, who you can see here talking about freezing frogs:

Another entertaining one was Christopher See from Hong Kong, talking about probabilistic medicine:

The rest of the talks are all up here as well.

Overall it was a very enjoyable and worthwhile day out, and I’ll definitely be going back next year.