Recently the wife and I have been playing through Tomb Raider and Bioshock Infinite, and there is one thing that has really stuck in my mind from those games: how much I hate scouring a world for crates of loot.

First things first – the new Tomb Raider is really good. It’s actually the first Tomb Raider game I’ve played (not sure how I managed that) so I don’t know how it compares to previous ones, but it looks great and the animation on Lara is top-notch. The storyline is pretty interesting and very dark, exploring her journey from gentle young woman to bloodthirsty killing machine. Well, the story elements explore her trauma and shock at having to kill to survive, but it obviously doesn’t affect her too much because by the end of the game you’ve murdered several hundred people. Such are the concessions to interesting gameplay I suppose, but it does create a bit of a disconnect. 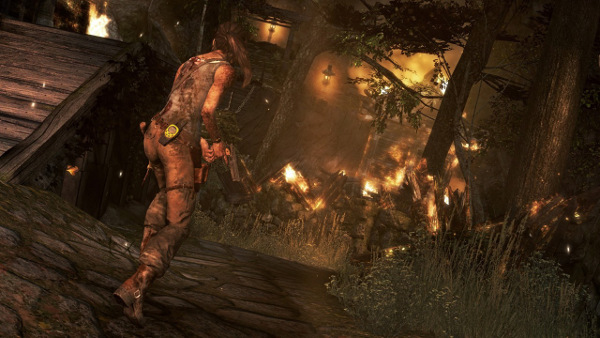 The were a few moments of intense frustration and boredom for me. These weren’t directly the fault of the game, but from years of conditioning. Most of the time my wife was playing the game and I was watching. Every so often we’d come into a large open area with loads of buildings and things to climb around. After ten minutes of viciously killing the local inhabitants, the next hour was spent meticulously exploring every single corner of every single part of the map, in search of crates of salvage, ancient relics or log books. It must be an obsessive compulsive thing learnt over her previous fifteen years of playing Final Fantasy games.

“OK, we must be done here, are you going to go rescue your friend now?”

“Hang on, there’s another thing over there I think I can get to…”

“You don’t need any more stuff.”

“But… need to get the things…”

“…I’m going to do the washing up, call me when you’re ready…”

The best part of the game in this regard is the Survival Instincts feature. Press a button and everything you can see that can be interacted with glows yellow. Which I feel should have sped up the exploration process a lot more than it actually seemed to.

I’m currently undecided about Bioshock Infinite, although it would appear that I’m in the minority. We both loved the first game – the art deco styling; the creepy atmosphere; the scary enemies; all came together to make a memorable experience. I don’t remember much about how it actually played, and as the general opinion is that Infinite is basically the same gameplay-wise, I think I may have a case of rose-tinted glasses. Because I’m just not having much fun actually playing the game.

We’re maybe three-quarters of the way through. It looks nice enough (we preferred the aesthetics of the first game, but that’s just personal preference), the storyline is getting quite interesting, and your companion character brings a lot of life to the game when you meet her. But far too often the game falls into that all-too-familiar and ludicrous situation of:

“I need to rescue Elizabeth, she’s been seized by the baddies again. Hmm, she can wait, I need to finished searching all of these bins for loose change and scraps of food. Oh, a few random rooms, I really want to get on with the story but if I don’t thoroughly search them I might miss a big pile of coins or an infusion or a good piece of gear…” 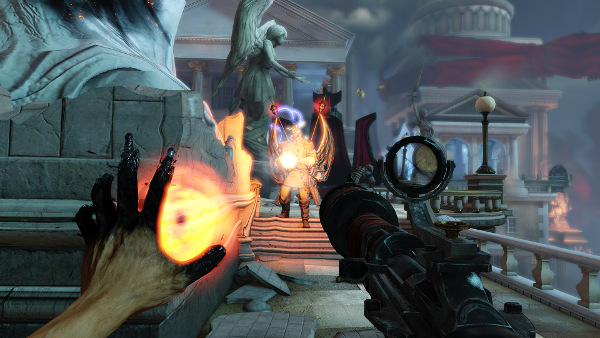 Nothing breaks the flow of a game more for me than having to take time out from saving the world to scavenge for junk, search for trinkets, or steal from random people’s houses. It’s not so bad if it’s just optional extras (e.g. relics and audio extracts in Tomb Raider), but in Bioshock it’s almost the entire progression mechanic. Upgrading your guns and powers requires money, which is primarily obtained from scavenging, and the health/shield/salt upgrade infusions are usually tucked out of the way behind closed doors. All of which means that you’re ill-advised to ignore the quest for loot.

Overall, it’s still a pretty good game I think. It’s very old-school in its mechanics (particularly the combat, which feels really dated), but it’s worth playing to see how a companion character can be done right.

So you should probably get it. But play Tomb Raider first.

4 Responses to “Bioshock, Tomb Raider and the tyranny of crates”