Chestenham Science Festival is quickly becoming a must-attend event in my calendar. This year I went down for the Friday and Saturday with my wife and we attended half a dozen events. From my limited experience I think you could pick any event at random and be almost certain to hear something fascinating. Here are a few of this year’s talks.

Rebuilding Our World From Scratch

If 99.99% of the population was wiped out tomorrow, how would we survive as a species? What could we do to restore our way of life as quickly as possible, hopefully skipping that whole Dark Ages thing?

Lewis Dartnell opened by showing a standard pencil, one of the simplest products you can imagine, and saying that no single person in the world can make that pencil. You need to grow the trees, cut the wood, mine and shape the graphite, mine and smelt the metal for the eraser holder, and acquire the rubber. The knowledge is spread over many specialists all over the world.

He has written a book (as he kept reminding us) that tries to explain how to rebuild as much as possible of our way of life, starting from first principles (and the decaying remains of our current world). This includes starting a fire with a 9V battery and some wire wool, repurposing alternators to generate electricity, and building a gasifier from tin cans to extract gas fuel from wood.

An interesting idea is that the printing press is one of  the most vital technologies to rediscover early. Without it, information can’t be easily distributed and remains in the hands of the powerful, hampering progress. Similarly photography is great for passing on information, and can be achieved with fairly simple technology.

Other topics of the book deal with agriculture, time of day and basic chemistry. I thought there was a bit too much time spent trailing the book at the expense of actual content in the talk, but it was quite interesting. Find out more here.

The Science Of Cake

With the lure of baking, science, explosions and free cake samples, how could we resist? Henry Herbert of the Fabulous Baker Brothers was joined by chemist Andrea Sella and material scientist Mark Miodownik for some live baking action, interspersed with plenty of explanations about exactly what’s going on in your mixing bowl.

Why does egg go white after whipping? It’s all to do with refraction from the tiny air bubbles, bending the light in all directions until it’s opaque, and in fact this follows the same principle as to how sun cream works.

Does egg whip up quicker in a copper bowl? Yes it does, because the copper ions bind to the proteins, stabilising the foam (and making it taste foul is the process).

Why are some things sweet? Nobody really knows, because many completely different shaped molecules taste sweet, including some that are quite dangerous. Ever wondered why children used to pick and eat lead-based paint? Lead acetate is horribly bad for you, but tastes rather nice. 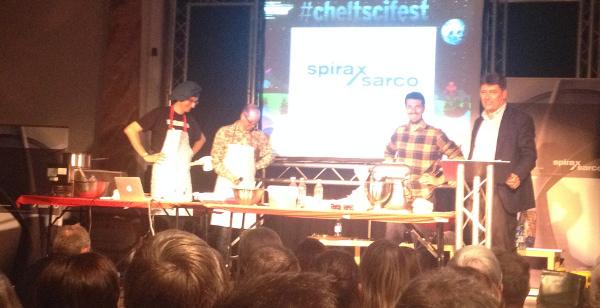 No presentation including Professor Sella would be complete without something exploding, and he didn’t disappoint by demonstrating the destructive power of flour dust, blowing the top off a can. He also answered the question, “Would baking in a vacuum make a cake rise more?” It turns out this is something he’s actually tried. The vacuum oven was written off as the splattered cake mix couldn’t be removed.

And finally a member of the audience turned out to be a food scientist who shared some videos of CAT scans of things baking, which turns out to be really useful for learning about how to control the air pockets that form as the cake rises. The cake samples weren’t half bad either.

The was the last presentation we attended, and I wasn’t sure how it was going to be as it sounded quite technical. I needn’t have worried though as Mark Lythgoe and team took us on a fascinating (and slightly shambolic) tour through a couple of cutting edge medical imaging techniques, in what was probably the most interesting talk we went to.

The first technology was about literally making tissue completely transparent (although only dead tissue). This requires two processes – removing the pigments, and injecting the tissue with a solution of the same refractive index so that light passes straight through. They demonstrated this live on stage with a tiny heart, lung and brain, and by the end of the talk it was finished and you could read writing placed underneath the organ, which was quite strange to see! (Obviously there was still some distortion, but that would have been caused by the irregular outer shape of the tissue).

The point of this is it gives an easier way to detect diseased tissue after a biopsy. Human tissue emits light, just like those glowy jellyfish, but very dimly. Different types of tissue give out different types of light, but because the body is opaque you can’t see it. By making the tissue invisible you can sense this light and spot diseased cells, which glow a different colour.

The second technology was photoacoustic imaging. When you fire a short pulse of bright light at something it heats up and expands. This expansion creates an ultrasonic sound wave, which is different depending on the material that is heated. The heating amount is very small (less than 1 degree), so it is safe to fire a laser pulse into the body to generate ultrasound from some distance underneath the skin. You can then use a detector and some clever maths to reconstruct a 3D image of the tissue structure that produced the sound.

Photoacoustic imaging is especially good at picking out melanin from surrounding cells, so by genetically engineering cells to produce melanin as well when another gene is active you can directly image gene expression. This has exciting implications for cancer research.

We also saw a hilarious set from the very talented Robin Ince, learned about the language of chimps with Liz Bonnin and friends, and heard some heated discussion about the heritability of intelligence between Robert Winston and Robert Plomin. But that’s enough words for one day. If you can, I highly recommend popping along to some talks next year!