Now that I don’t make games for a living I find that I’m more inclined to do so in my free time. Nothing even approaching a releasable standard, but it keeps me amused, and is an excuse to mess around with network programming. Occasionally I’ll inflict a messy prototype on my friends at a LAN party, and I’ll probably write more about them here at some point.

For one prototype I needed some kind of random ‘house’ layout, with rooms and corridors and the like. Procedural maze generators seem to be one of those things that most programmers end up writing at some point, and as mine works reasonably well for what it is I thought I’d share it in case it’s useful for anyone. The code isn’t particularly efficient for large, deep layouts, but it’s quick enough for what I need it for.

First of all, here’s the full code. I don’t think there are any external dependencies except for a RandBool() function, so it should pretty much compile (although I haven’t tested it stand-alone): 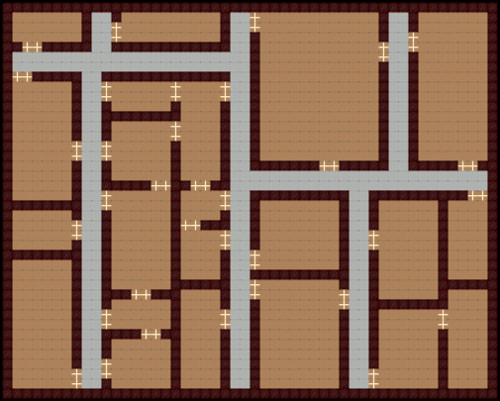 Each tile is brown for wall, orange for a room, grey for hallway, and the light crosses are the doors (I’m a programmer, not an artist…). Let’s see how it works.

I started from this pseudocode, referenced from this Stack Exchange question about house generation, and finished it off and made a few tweaks.

The idea is to generate a series of hallways and rooms, and add doors so that the layout is fully connected (every room is accessible from every other room). This is accomplished by repeatedly subdividing the space, first to create hallways, and then to create rooms. There are a number of stages:

And that’s about it. Eventually all rooms will have doors to either hallways or other connected rooms. Here are a couple more layouts: 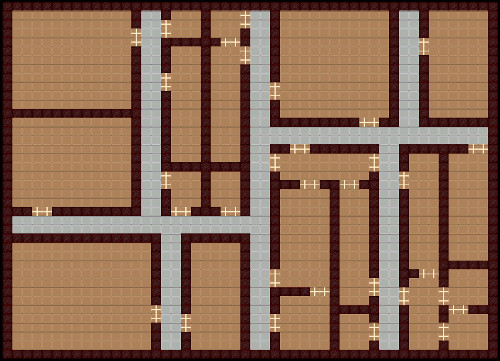 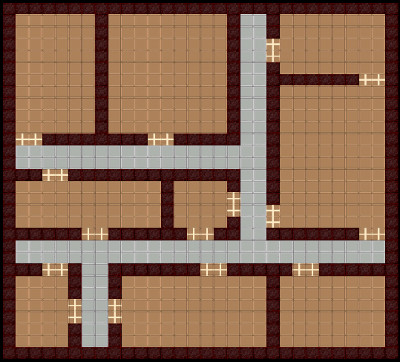 There are a few variables at the top of the file that can be tweaked.

From a house to a maze

Houses are generally well connected – it’s usually quick to get from any room to any other room, so there are often lots of doors or loops (except for my house, which seems designed to maximise journey times…). Mazes are supposed to be hard to navigate, with many dead ends and only one route through. Luckily enough, this algorithm supports creating both.

Hallways are the main backbone of the connectivity. Having many hallways greatly reduces the average number of doors that must be passed on any journey. Reducing hallways will make your layout more maze-like. You could remove all hallways entirely by modifying the start room to be of Hall type, but I haven’t implemented this.

Setting both door probabilities to zero will ensure the connected graph is a tree. This maximises the average number of doors traversed per journey.

Reducing the room size could be used to maximise the number of doors (although the layouts are less interesting with very small rooms.

Here is an example of a large maze-like layout I generated: 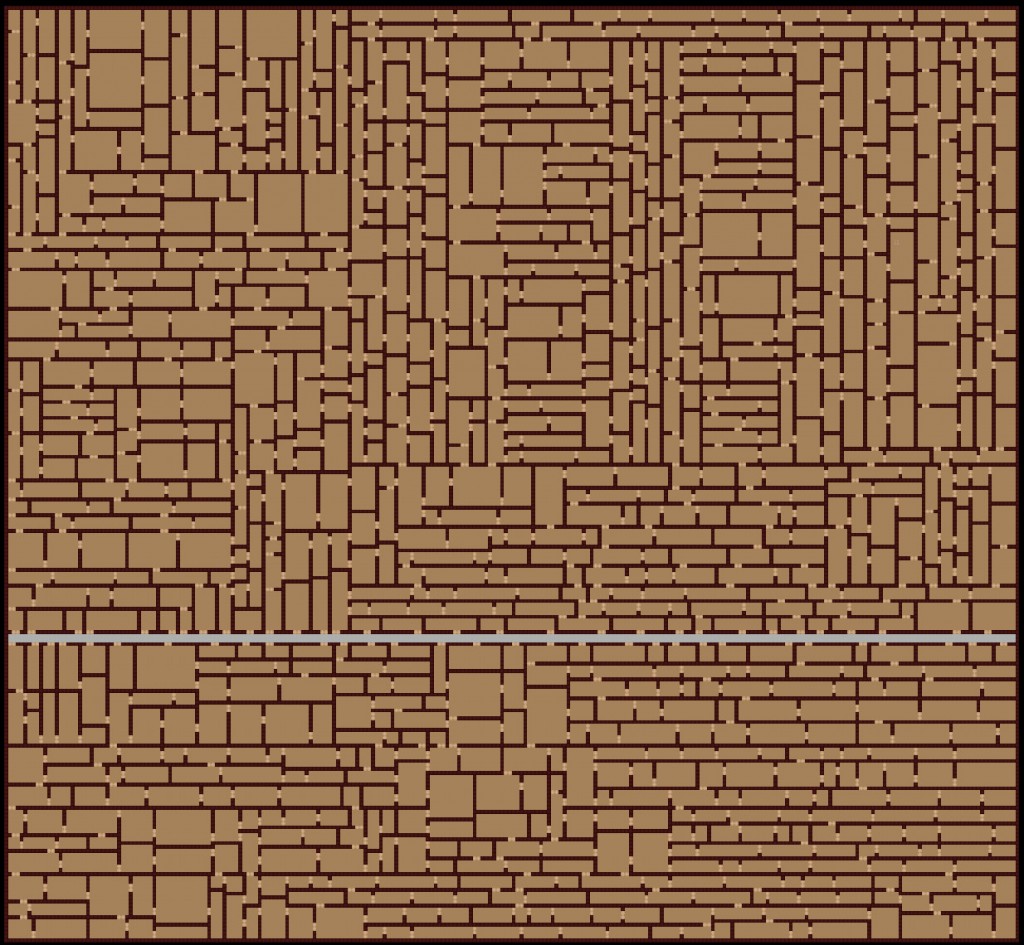 Enjoy solving that one!

If you want to play around with the generator but don’t have your own code to plug it into, here’s a Windows demo executable you can download:

Disclaimer: This was written in my Mirror game engine, and is a quick hack-job to have something runnable. As such it starts and connects to a local multiplayer server, and requests network access. Feel free to deny access as it doesn’t do anything, but taking all that stuff out would have been a fair amount of work. Just so you’re aware.

There is also a bug with using hardware acceleration on some systems that I never got to the bottom of. So if HouseGen.exe doesn’t work, try HouseGen_warp.exe which uses a software renderer. The joys of PC development when you only have one machine…