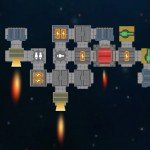 It’s been a slow year on the blog. This is mainly due to taking up a few new hobbies (learning Norwegian, and getting into astronomy and astrophotography) and preparing for a new child. I may write about some of these in future. But in the meantime I’ve done a little bit of work on my previously-untitled “spaceship game”, and figured I should put it up for download on the off-chance that anyone wants to play it.

I’ve mainly improved the frontend and UI, as it used to use the terrible looking built-in UI system in Unity pre-4.6. However, as my day job is making nice UIs for mobile apps, it’s not really the sort of thing I want to spend all my spare time on as well, so it’s pretty minimal (but not as embarrassing as before). The graphics are also terrible, because I’m not an artist. You may have heard the term “programmer art” before. If not, you have now.

At least the game now has a title. Using the time-honoured method of picking pairs of vaguely relevant words at random and putting them in Google until no existing game comes up, it is called Galaxy Arena. Download it here: 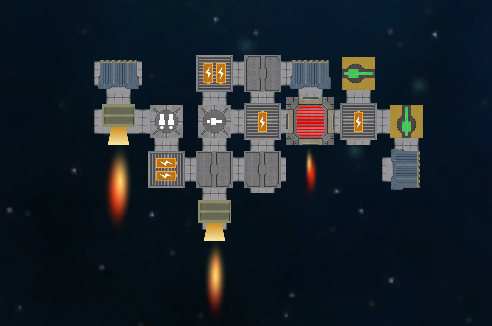 Galaxy Arena is a multiplayer-only game where you competitively build a spaceship out of square parts against the clock, and then fight everyone else with your creation. It’s pretty obviously heavily inspired by the board game Galaxy Trucker if you’ve played that (and if not, you should).

You can play free-for-all or with teams, and it supports 2-12 players. Team support is flexible but rudimentary – simply type a team number into the Team box by your name in the lobby, and the game will form teams accordingly.

I’ve only actually tested it on a LAN with up to eight players, but I presume it works over the internet. It uses the Unity development server for posting open games, and this is occasionally down for maintenance. If it is, you’ll just have to try again later (sorry), or use the Connect to IP option (port 33104).

The first phase of the game is where you build your ship. Your Core module in the middle of the screen. This has tiny engines and a puny laser built in, and your match is over when it’s destroyed. Around the edge of the screen are eight stacks of tiles, shared between all players. You have 60 seconds to grab tiles from the edge and attach them to your ship.

Left-click: grab a tile / place a tile if valid (when green)

Ships must be built following a few rules:

After the time is up, you’ll be taken to the arena to fight.

Core. Lose this and you die.

The arena stage is last man (or team) standing. There is no time limit and no walls around the arena, so just play nice and don’t run away forever… (this is remaining a prototype, not a polished full-featured game).

A / D : steer left / right. Steering is faster the more engines and gyros you have, and slower the more mass of ship you have

Space : hold down to boost your engines, but this drains your energy bar quickly

Arrow keys : fire all of your weapons that face in that direction. Firing uses energy, and weapons won’t fire if there isn’t enough.

Tab : show the scores (just for fun, they don’t mean anything). Score is purely the amount of damage you’ve inflicted.

And that’s about it. Here’s a video of the previous version of the game. Enjoy!