Just before Christmas I had a couple of days off work and planned to give Elite a proper play, but then something happened: a friend very kindly bought me a copy of Kerbal Space Program. I knew of the game and I’d always been curious, but I assumed I would quickly get bored of a predominantly sandbox experience. Apparently I was wrong – I booted it up one morning and spent the next three days solid engrossed in orbital mechanics, staging, lander design and “delta-v”.

The game involves building rockets and space planes from a huge variety of components and launching them into space to explore the solar system (different to but based on our solar system, which I guess stops people nitpicking about accuracy), while using reasonably realistic physics. As such, it was humbling as a self-confessed science/space nerd that it took an hour of failures and a tutorial before I managed to get a rocket into orbit. It’s refreshing to play a game that pays so little attention to traditional ‘gaming’ experience and relies so much on a knowledge of physics. 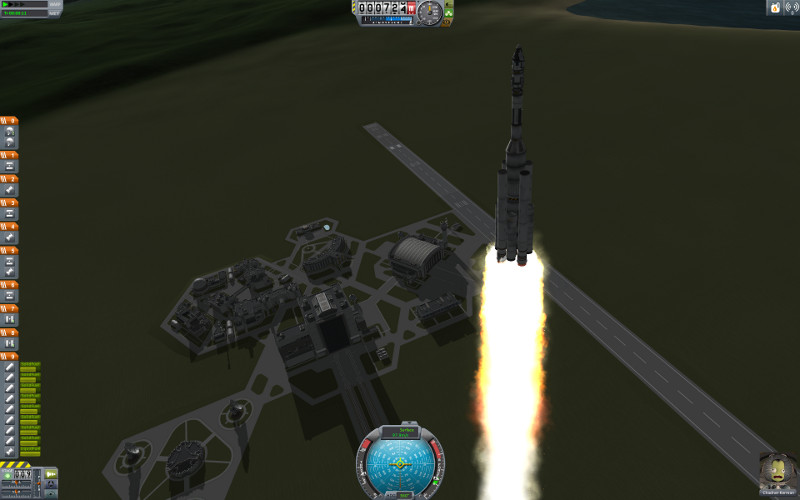 A brave Kerbal on his way to the moon

There are three different game modes – sandbox mode where everything is available, “Science sandbox” where new parts are unlocked by doing new things and using scientific instruments, and a full career mode which also adds money earned through contracts. I was warned that the career mode was really hard, so I went with Science mode. This lowers the learning curve of Sandbox mode by introducing new components slowly, while removing the stress of money and crew management. The game is still in Beta but when it’s done I’ll have a stab at Career mode now I vaguely know what I’m doing. 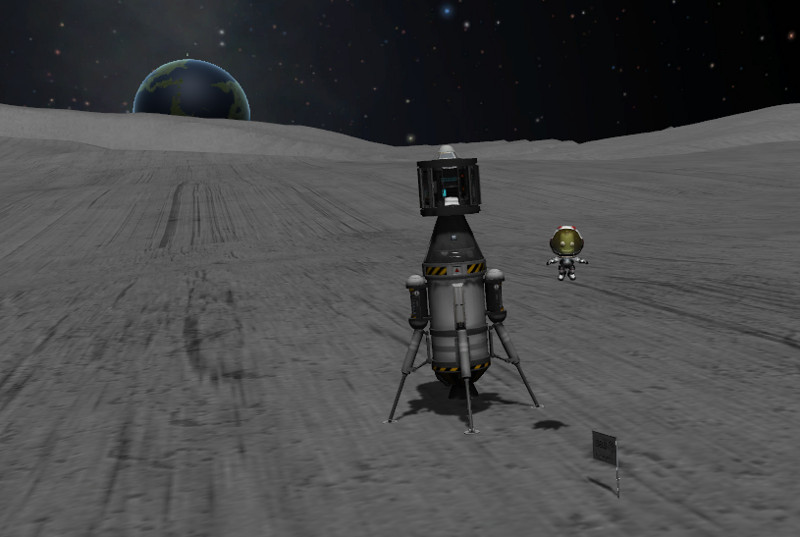 This little guy can’t get home. I’ve reclassified him as Moon Base 1

I was struck by the familiarity of my progression during the first few hours compared to the real space programmes, and the real sense of accomplishment that I’d not felt in a game for years:

Each stage presents new challenges and physics concepts to master. Getting into space requires staging (jettisoning empty fuel tanks and engines to make the rocket lighter). Obtaining a circular orbit needs an understanding of the apoapsis and periapsis orbital nodes (farthest and nearest points) and how burning at one side of the orbit only affects the other side. And then you can worry about orbital transfers to get to other moons and planets.

Get used to the view, son, you’re stuck on Eve for the forseeable future…

Thankfully the game provides a great maneuver planning tool. The current orbits of all bodies and ships are shown, and you can add planned maneuver nodes along the path. Drag the node in each of the six directions (prograde and retrograde, normal and anti-normal, radial and anti-radial) and the predicted path updates, including closest approaches to other bodies and ‘encounters’ (getting within their gravitational sphere of influence). While I’m sure NASA use complicated maths to plan their paths, in this game dragging nodes around until you hit on something useful also works while you’re getting the hang of what each direction does to your orbit. Then you just follow the directions on your control panel to carry out the planned burn.

The aerodynamic model is very simple, otherwise this rover and sky crane would never get off the ground

After that the sky is, indeed, the limit. I’ve got “small colonies” (read: failed return missions) on Eve (Venus) and Duna (Mars), and used a sky crane to drop a small rover on the moon. The other planets require even more powerful rockets to reach, and as we speak there are probes scouting the outer planets for my future (probably suicide) missions…

And finally, for the truly brave, there is the small matter of orbital rendezvous and docking. Why get just one spacecraft where you want it to go when you can get two in the same place, at the same speed, at the same time? Building substantial space stations requires launching them in multiple sections, and this is my next project. My first and only successful docking took an hour, but it must get easier. I mean, it’s complicated, but it’s not rocket science.

The wait is over, Elite: Dangerous has been out for a month now and I’ve been playing it quite a lot. I was going to wait until it was actually released before diving in, but I had the chance to borrow an Oculus Rift DK2 for a weekend right at the end of the beta, so I dived in early. And both are awesome!

I’ve heard a few predictions that the Rift won’t turn out to be any good. I don’t know how it’ll fare as a consumer device in the market, but from a technical perspective I can safely say it works great. 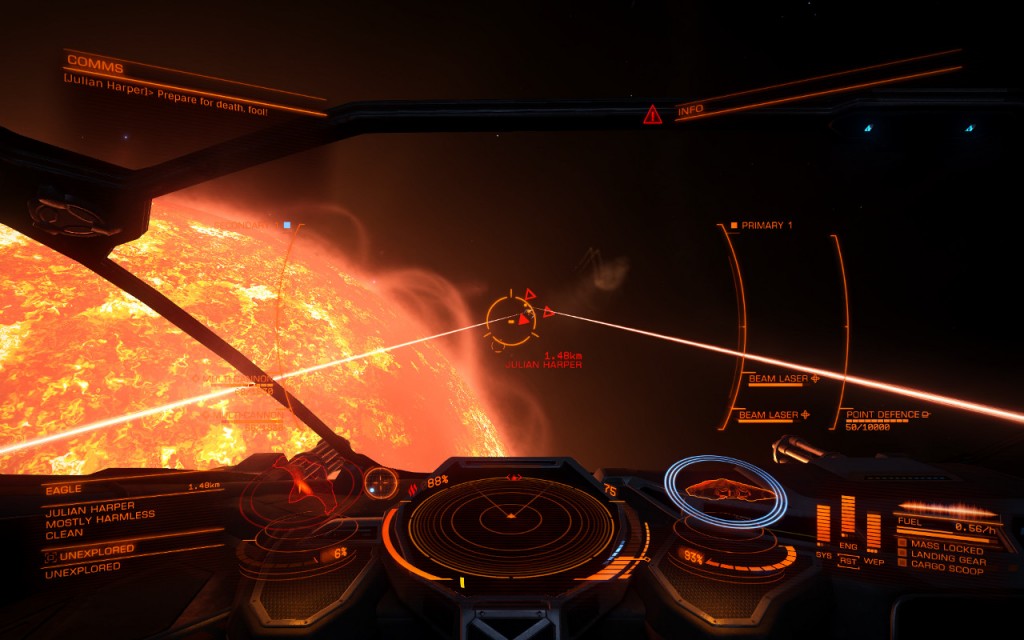 Prepare to be randomly attacked by many of the psychotic NPCs

I had a quick go on the original devkit about 18 months ago at the Rezzed show, playing a completely unsuitable game (it used FPS controls on a joypad) and it was… quite good. You could see the giant square pixels, and everything was a bit blurry and smeary, although that was probably a combination of steamed up lenses and the fact I wear glasses. But still, you could look around it was pretty immersive – until the point when I moved my head both in real life and with the stick at the same time and felt instantly sick. Moral of the story – the Rift and FPS controls don’t mix.

The DK2 is a massive improvement. The resolution is higher and it added full head positional tracking. The positional tracking is the biggest improvement to immersion – the best games and demos involve sitting in some kind of chair, and the first time you lean over and look behind or underneath you, you almost forget where you really are. 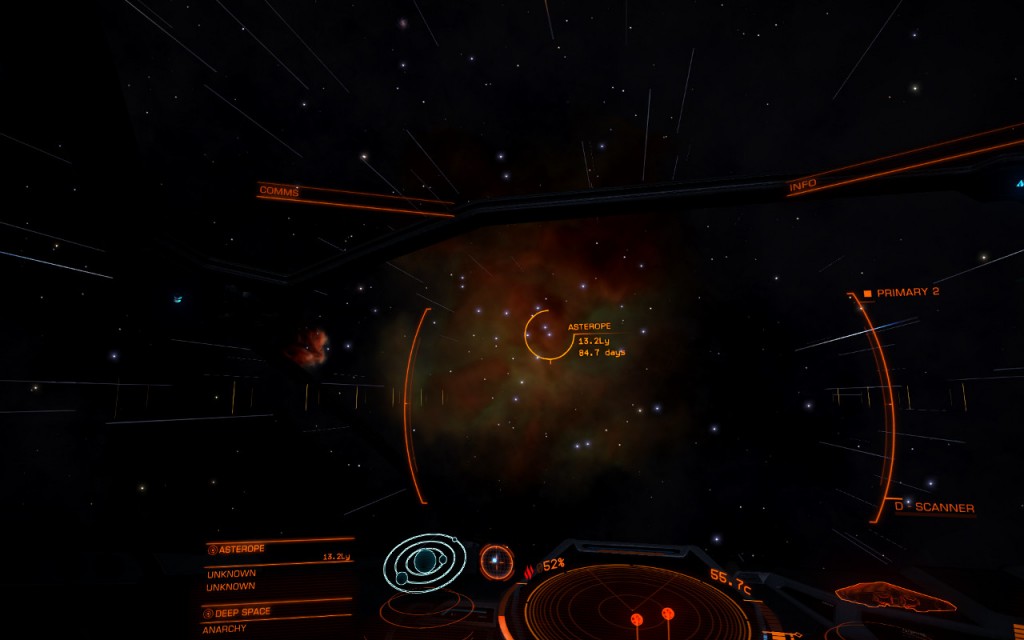 On my way to the Pleiades

Elite is an unashamedly slow-paced space simulation, which really benefits from the immersion offered by the Rift. Despite the complicated controls it’s completely possible to play on an Xbox 360 pad (assuming you don’t have a flight stick) without touching the keyboard, which is vital for VR (use the Advanced Pad preset in the options – lots of controls are mapped to “hold a button and press the D-pad” which takes a bit of learning but works well). In particular, the dogfighting is much better with the Rift as you can look up out of the roof to keep track of your target. The only downside is the text is a bit small, so you have to lean it to read it easily. But the fact that you can do just that is awesome in itself! 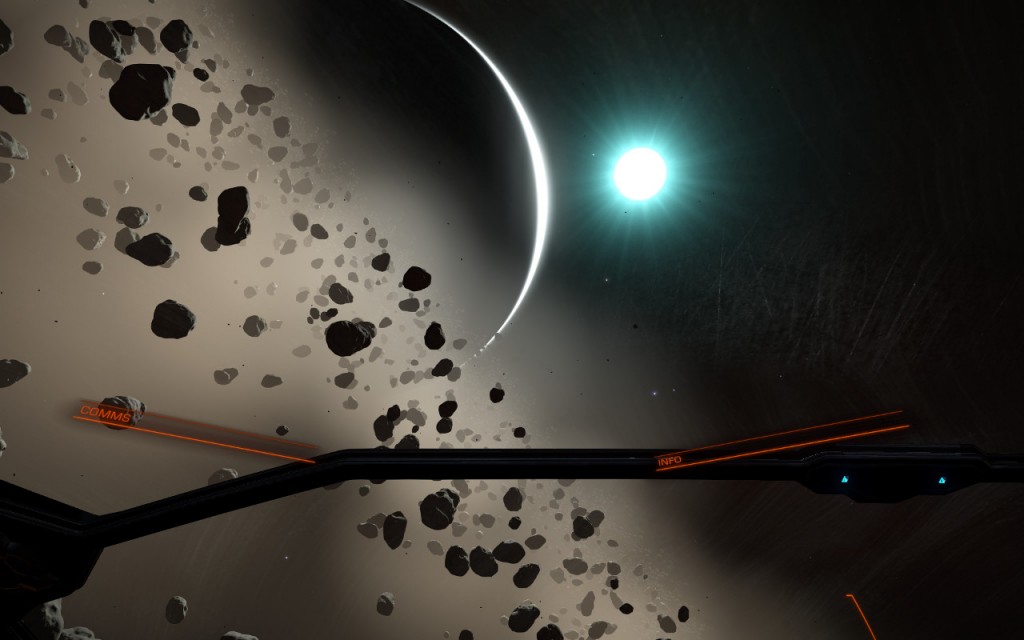 Ringed planets can be very pretty

The first few hours are a bit of a grind as you carry out delivery missions for a few thousand credits each, but pretty soon you can get into a dedicated trading or fighting ship and make some serious money. My early goal was to get into the classic Cobra Mk3 and kit it out, and then go on a jaunt somewhere interesting. Looking around the map, the closest landmark I could find was the Pleiades star cluster and the thin nebula around them, at a mere 300Ly away. The journey there took an hour or two, scooping fuel from stars on the way, and watching the nebula grow bigger after each jump thanks to the dynamic sky box. 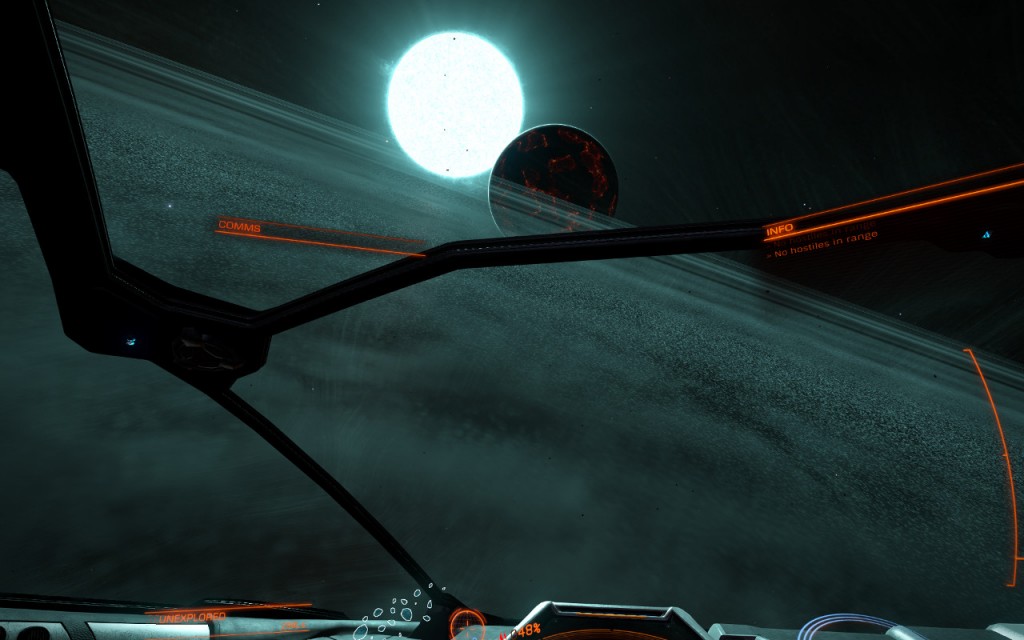 A young planet around one of the massive, bright Pleiades

The attention to realism is what makes the game for me. Everything is to scale, from the layout of the stars to the planets in a system, and planets and stations move and orbit correctly within systems. That’s such a surprise after being used to the static universes of Eve and the X games – for example when you find your trade route has got a bit slower because the station is now on the wrong side of the planet compared to an hour ago.

Arriving at the Pleiades, it’s all massive, bright, young stars with new lava-riddled planets around them as you’d expect. Slightly less expected was the random NPC cruiser that started shooting at me shortly after I took the screenshot above, hundreds of light years from civilisation. But I suppose the game needs to attempt to give the illusion of a populated universe. 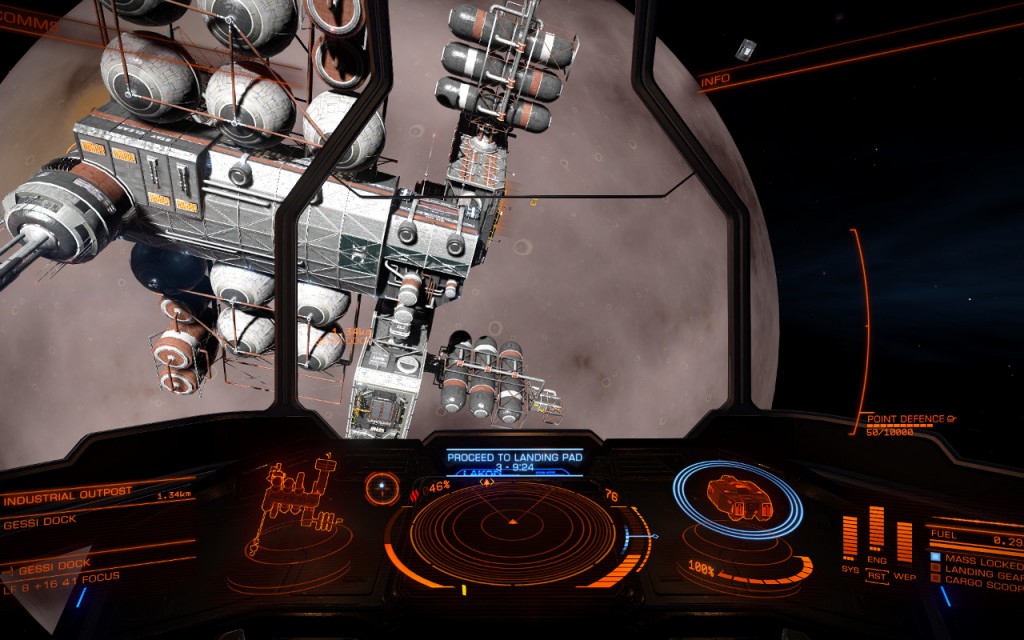 Back to space trucking between outposts

One criticism I do have is the multiplayer aspect. I admit that when I’m trading I play in Solo mode, with no other human players. There are no ‘positive’ interaction you can have with other players – all you can do is randomly blow them up or crash into them. Given that losing a ship full of expensive cargo can set you back hours of game time, I don’t have any desire to risk it. I appreciate that some like the thrill and the adrenaline, but being on the wrong end of a pirate encounter isn’t for me. Hopefully Frontier will add some other incentive to play with others, but in the meantime I’m happy enough in my own little world.

It’s also not a game you necessarily want to play for hours at a time, as it can get fairly repetitive grinding money for the next ship. But by mixing up a bit of trading, fighting, mining, exploring and keeping up with the evolving story, as well as playing in small doses, it’s still a game I feel excited to get back to and play. A worthy new (old) entry into the sparse space sim genre!